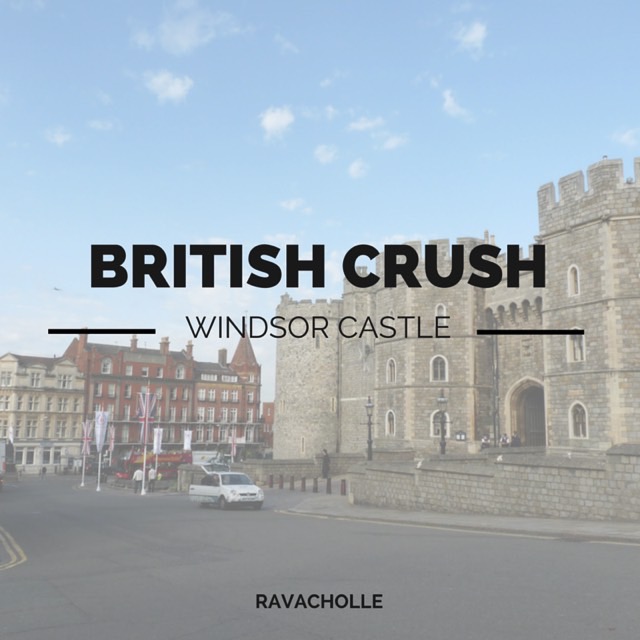 I LOVE the UK, the Queen, the scones, the telly, the tea, the shops, the humour, the different accents, well… you guessed it pretty much everything about the British culture. Hence the title of this series ‘British Crush‘ where I will talk about something that I love about the country and its lifestyle.
This awesome building is situated in Windsor, obviously, and has been used since the 11th century. It was built after the invasion of William the Conqueror around 1070 on the site of previous fortifications standing next to the River Thames. The original fortress was later converted into royal apartments by Edward III in the 14th century. This royal residence and is now the oldest and largest inhabited castle in the world.

Windsor is situated in the English county of Berkshire, in the Royal borough of Windsor and Maidenhead. Are you as lost as me? Well, Windsor Castle stands at about 40 km West from London. It would take you from about 40 min up to an hour and a bit by car to get there from the city, depending on the traffic.

In 2011, I visited the south of England with the bf on the most romantic road trip ever.  We were both students, got into our first car accident in Southampton and didn’t have much money to spend on frivolous afternoon teas in scrumptious local cafés. We were traveling for a full week in September and the weather was pretty cold, especially on the coast. We saved a lot of money by sleeping one night every two nights in our car and the other nights in random youth hostels that cost us the same amount as a room in a regular hotel in continental Europe.

We had decided what we wanted to see and visit based on our made by us circuit. We had checked the price of an entrance to Windsor Castle and kept the money safe in order to do everything we had planned. To give you an idea, our spending plans included having enough money for a meal at KFC in Dover before catching the ferry back to France. We really were traveling on a shoestring (!) 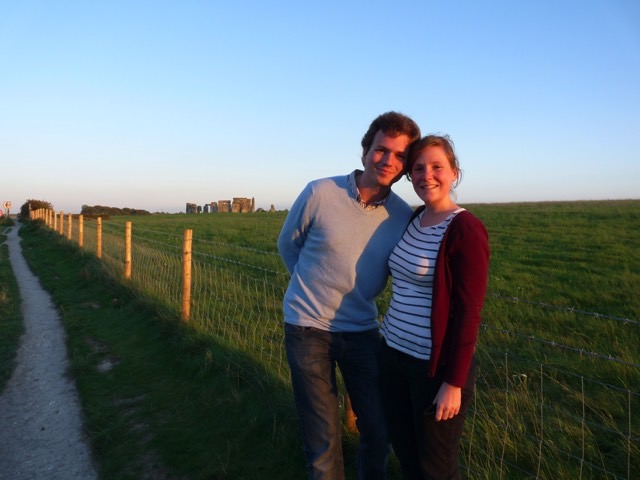 We arrived in Windsor at night from Bath and the Cotswolds. We had made a stop at Stonehenge and checked out pig farms on the road. We were tired and cold and we couldn’t find any street that looked safe and tranquil enough to spend the night. You see, pretty much every street in Windsor is a private lane. You read that right. No one except inhabitants of the street, and their guests I suppose, can park there legally. Obviously, we looked pretty weird with all of our clothes and towels laying on the backseat of the car, so we drove around and settled in what looked like a very suburban area.

In the morning we got awaken by what looked like a flock of kids from every age and height in uniforms. They were all headed to school and I distinctly remember one saying with the cutest accent ever “they slept in their car hahaha”. Oh we had never been that glamorous in all our lives… 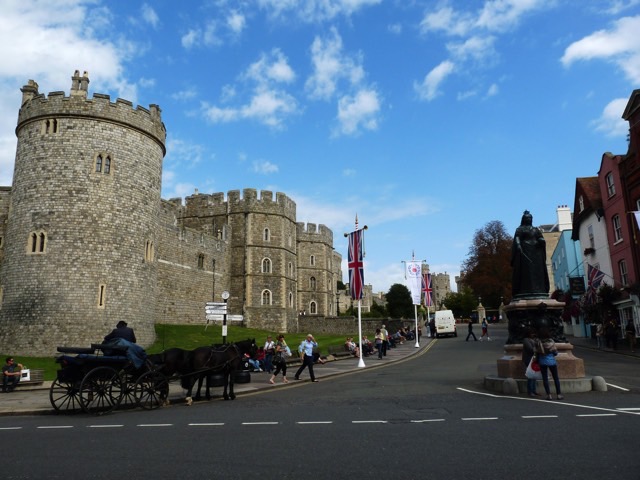 At around 8 a.m. we finally started the day right by visiting the heart of Windsor. We were totally amazed by the imposant place the castle takes in this small city. As you can see on the picture above, it literally is in the centre of town. We walked for a while and when the time was right, we finally lost an arm to pay for the visit of the castle (around £20).

The first building that stood on the previous fortifications was the Round Tower. It was constructed during the reign of Henry II  in the 12th century and it divides the castle into two wards. It is actually not circular as its name suggests, but has the irregular shape of the motte is was built on.

Been there, done that. Cate Blanchett follows my footsteps in Windsor by attending a gala in 2014. I was there first, honey.

As you can see, the castle makes everyone look fabulous. On the left, Cate Blanchett attends a charity dinner hosted by the Duke of Cambridge to celebrate the work of the Marsden Hospital of which he is president. On the right, I am casually walking around the grounds of the castle with my stylish audio guide. We weren’t dressed for the same occasion (because otherwise, I would have looked more fabulous and sophisticated), but we can all agree that the Round Tower in the background gives us both the perfect glow. In fact, I gained my glamour back that day. 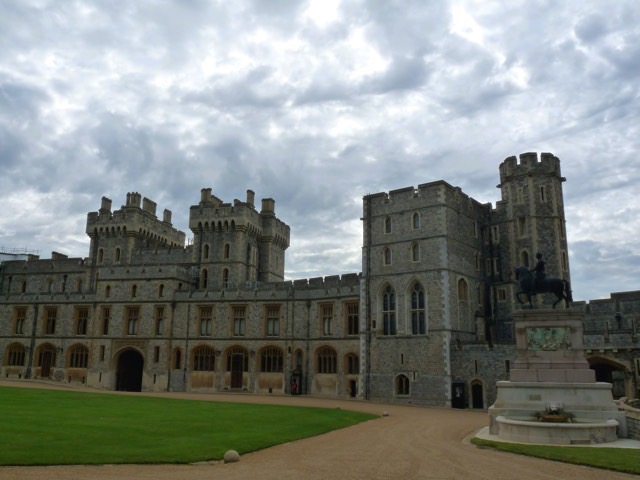 The Upper and Lower Wards flank the Round Tower that stands in the Middle Ward, right in the middle of the two courts. The State Apartments where the Royals live is situated in the Upper Ward and was unfortunately not open to the public when we visited. Below you can see the other side of the Apartments pictured above. 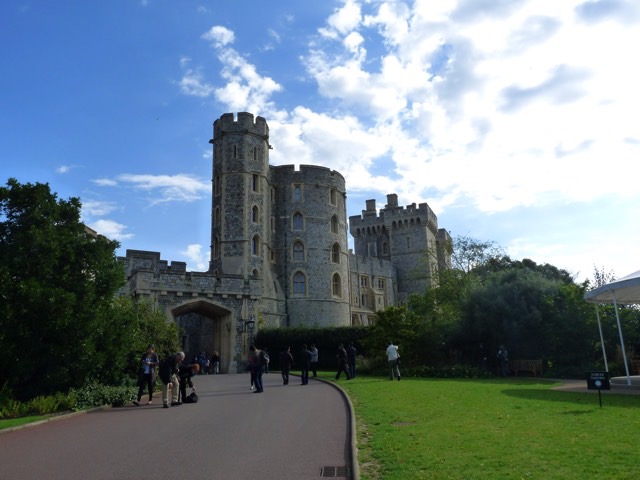 This is actually where you have to walk to enter the Upper Ward. What we were unaware of at the time, it’s that we were right next to The Long Walk, supposedly situated behind the trees on the right of this photo. Click here to see what I thought I was going to see and that I totally forgot about and finally missed. That’s another visit planned for another time!

The Long Walk is an approx. 5 km avenue that leads from the South of the Castle into Windsor Great Park and that was laid by Charles II in the 17th century. The King was very fond of the works of Louis XIV of France and imitated French design a lot in his restoration of the Castle after the Civil War. The Long Walk was moulded on the grounds of Versailles.

The Order of the Garter

In the Lower Ward is situated the St. George’s Chapel which is the Mother Church of The Most Noble Order of the Garter, founded in 1348 by Edward III. The Order is the highest order of chivalry (societies or fellowships of knights) in the UK and is dedicated to St. George, patron saint of England. 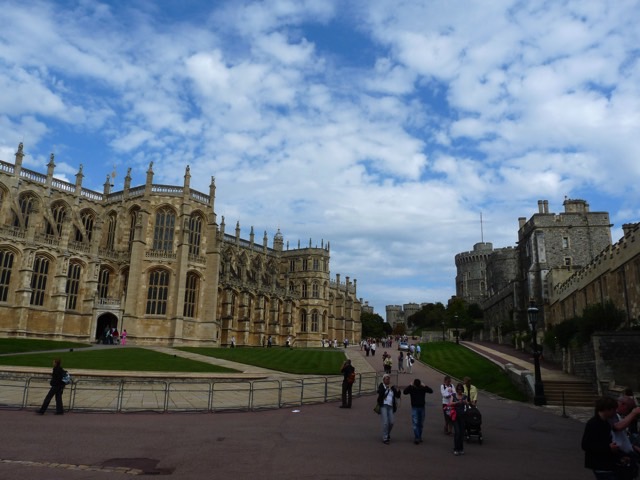 It is mostly believed that the origins of the Order came from an incident that happened to the Countess of Salisbury. She was either Edward’s future daughter-in-law or her former mother-in-law, it is unknown, but while she was dancing at a ball, her garter slipped and some men laughed at her. The King picked it up, gave it back to her and said “Honi soit qui mal y pense” (“Shame be the person who thinks evil of it.“) This became the motto of the Order which honours the people who have held public office or contributed in a particular way to national life, or have served the Sovereign personally.

Everything in the Chapel is beautiful, I didn’t know where to look first. The Quire area (aka The Choir) has also an amazing ceiling. We couldn’t take photos either but this one above shows a bit of the ceiling and the checkerboard floor that I really liked. We can’t really tell from this picture, but it does feel intimate to stand in the the Quire as it is quite small.

The heraldic banners of the Knights (companions of the Sovereign) of the Garter hang above the upper stalls where the Knights have a seat for life. Behind the stalls, the walls have about seven hundred Garter stall plates (where the arms of current and former Knights of the Order are engraved) hanging on them. Each Knight is allotted a stall in the Quire and the plate is affixed in his personal stall. When he dies, his successor takes his place in the stall and hang his own plate as well on the wall.

Many monarchs are buried in the Chapel including the famous Henry VIII, as well as his favourite wife Jane Seymour (in the Quire). Charlotte of Wales who was the first wife of our first King Leopold I of Belgium is also buried in the Chapel. She had died at just 21 years old after having given birth to a stillborn son.

In November 1992, a major fire caused a lot of damage to the Upper Ward. The ceiling of St. George’s Hall had entirely collapsed. Queen Elizabeth II stated “1992 is not a year I shall look back on with undiluted pleasure. In the words of my more sympathetic correspondants, it has turned out to be an annus horribilis.” As well as having her home destroyed in flames, The Queen saw her three children going through marriage difficulties: Prince Andrew separated from his wife Sarah Ferguson, Princess Anne got divorced and Prince Charles and Diana’s marriage was on the rocks. Their divorce was even announced three weeks after the fire occurred. 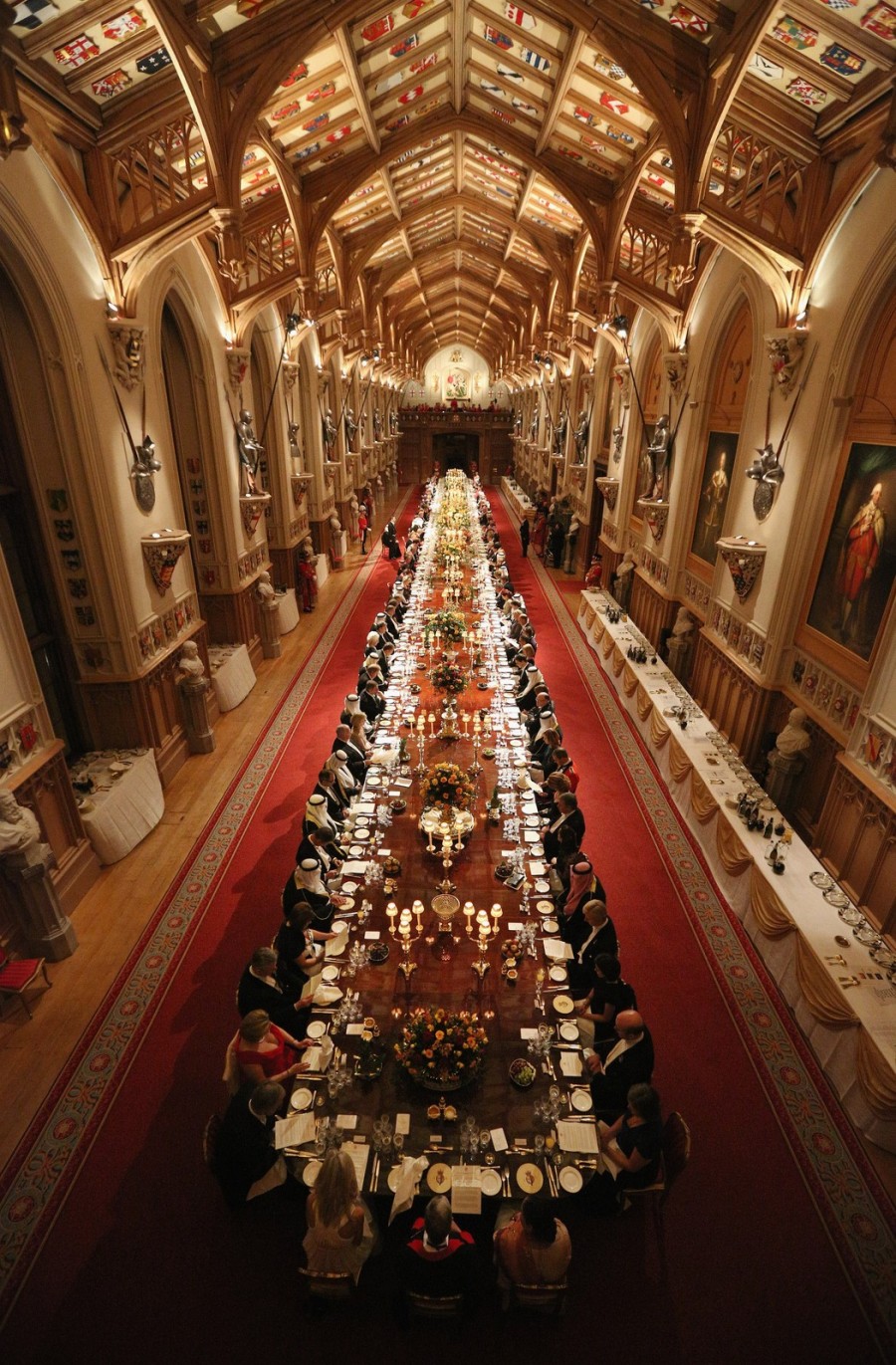 Standing in the hall is magical. It was my favourite part of the visit, even before St. George’s Chapel. The ceiling has been restored with a new design and it looks stunning. I was blown away and my neck hurt from looking up and around the room.  The ceiling is covered with 980 shields representing the colors of Knights of the Garter. They’re all numbered to be able to check easily to whom it belongs. When looking at them closely, you’ll see that some of them are white. The shields have had their colors removed because the Knight it represented had brought dishonor to the Order. I immensely enjoyed seeing the Grand Staircase: it was absolutely breathtaking and I loved everything about it. This photo doesn’t really give it justice but it will do as we were not allowed to photograph anything inside the castle. 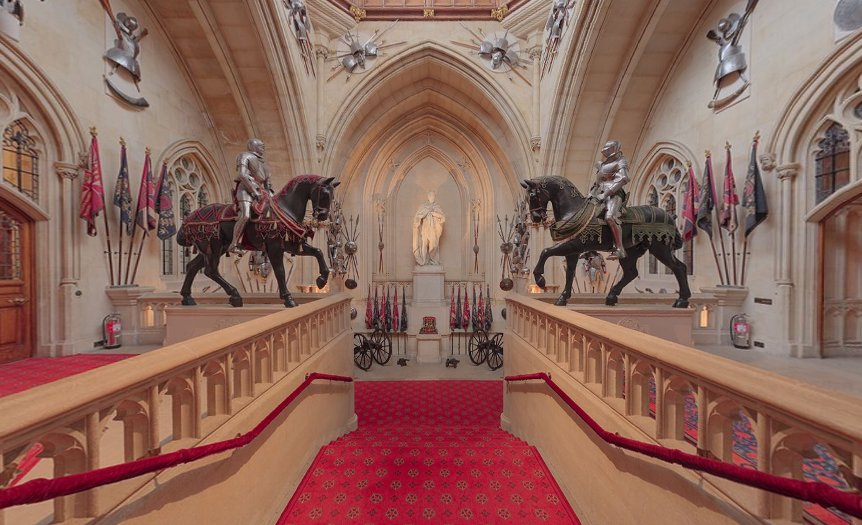 Other Awesomeness in Windsor

♥ Queen Mary’s doll house built in the early 20’s. A real architect actually designed it and it’s totally worth it to see it in person. There is even running water through the pipes of the house! It was a gift for the Queen but also a historical document on how an aristocratic family was living at that time in England. Real books were written especially for the house and the bootles in the cellar were filled with real wine or spirits.
♥ Eton and Eton college that is just situated next to Windsor. The guided tour of the college is a must! Well, it’s compulsory, but it was so interesting and our guide was the nicest and best storyteller. Princes William and Harry studied there.
♥ Waitrose where we had our lunch. Only because I love Waitrose and I once saw a news segment about the Queen doing her grocery shopping there while in Windsor (on RTL-TVI!)

If you want to know/see/learn more, check out this article to know how a president is received by the Queen at Windsor or watch this documentary about the Royal Palace on Youtube to see the dollhouse and some of the secret passages dating from the 11th century!