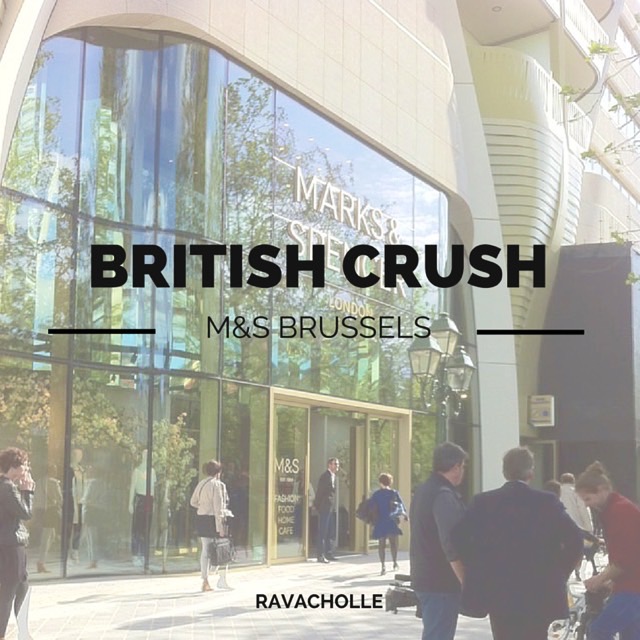 It’s no secret that I love supermarkets. I especially love supermarkets in other countries like Woolworths in Australia, Albert Hein in the Netherlands, Monoprix in France and Waitrose and M&S in the UK. I even remember going crazy in an Auchan when I was in Marrakech on a school trip in 2006. Everything looks different to me, and so amazing, and so smart and cute and different and delicious.
So, imagine my face when I entered M&S, Oxford street, for the first time in 2009. I even wrote about my fascination and love for the store on a very cute postcard I sent to the bf back then. That’s how big of a deal it is to me to visit supermarkets while holidaying.
Yesterday was the day M&S finally came back in Brussels after fourteen years of absence in the capital. I had to stop myself all day from getting there early and finally arrived at about 5:00 pm, reasonably combining my visit to the store with another errand I had to run.
First impressions: the building is so lovely. Kind of futuristic and very classy. I loved it already when it was in construction.
Inside: SO MANY PEOPLE. Very cute guys at the doors that all look British but they actually are just Belgians, I guess. The first floor is all about clothes so I just rushed to the food hall, my main area of predilection.
Again, SO MANY PEOPLE. It was hard navigating in the aisles. Very hard. First, let me say that the fridges are very stylish. Second, I didn’t have time to check everything because of all the people and then I also felt very stupid taking pictures.
The light was soft which was really nice, it really gets you into the mood for shopping. No harsh neons, everyone looks sexy and important and the packagings all scream “BUY ME!” Obviously.
All in all, I made a mental note to come back with the bf (and a lot of money) to choose products and read labels in the manner only real snobs do. I spotted a very attracting packaging that said something like “prepare this amazingly delicious Indian meal with all the ingredients that sit in this box”. Also, I CAN’T wait to buy bacon for my future full E. brekkies!

The store had a bakery that was already pretty empty. Taste the cookies, they’re heaven. The wine section was also very nice and fancy. I walked pretty quickly between the aisles because really I’m agoraphobe but I quickly found my favourite drink, a cold lemony water that was nearly sold out. I love the stuff. I even made myself a little habit of buying one bootle at the little M&S in St Pancras every time I’m heading back to Brussels with the Eurostar before going through security and boarding the train. 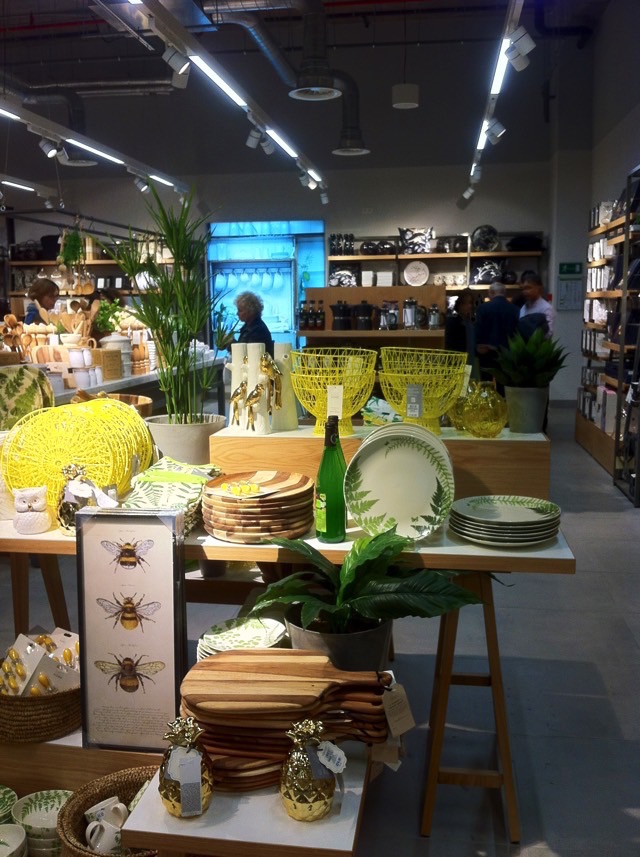 On the other side of the food hall is the home department. My second favourite thing in the world  of shops (after food halls). It was so pretty and expensive. I had the feeling of being in West Elm (that I visited two years ago in London) and I found two lovely things I would want to bring home. I’m going back to study those objects very soon. The plates were 4.95€ each and the tumblers were 18.95€ the set of four. I also loved the wooden platters/cutting boards. They were beautiful and I really want them, but at minimum 30€ each, it’s a bit too out of my kitchenware budget right now (I already have the essential to entertain, so that’s not something I would splurge on at the moment). 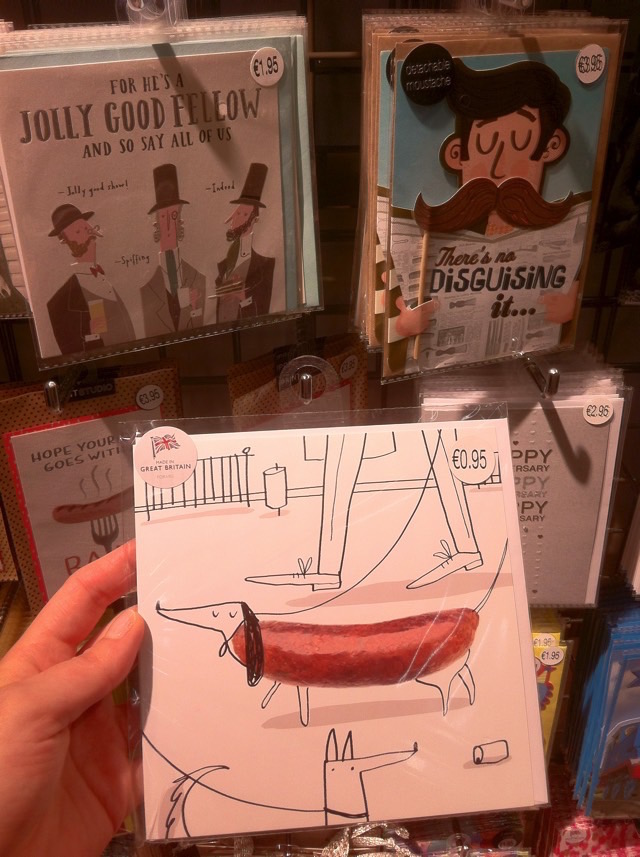 I rushed to the stationery section. Aren’t those cards the cutest? I might or might not have bought them all…. And the bf’s birthday was two days ago, so I was a bit sad the store didn’t open earlier because I actually got him a sausage dog greeting card… (but not as cute as the M&S one.)
M&S also have those very cute biscuits tins and I found cute ones shaped as a telephone box or a double decker bus and even one in honor of the birth of the Princess of Cambridge. That was pretty fast to have produced them already and got them in store! 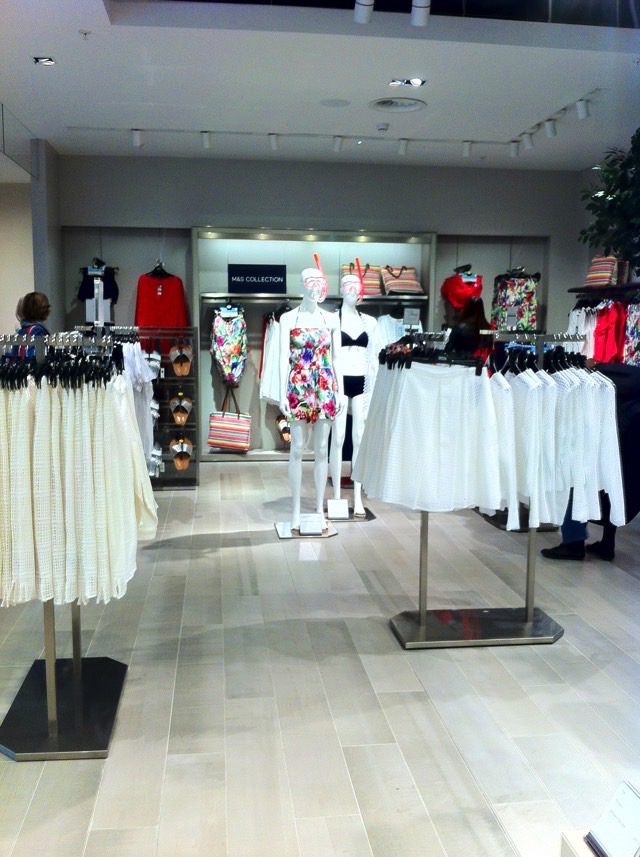 After buying some muffin cases, the lemon water and… yes, the cards, I headed upstairs. I had a quick walk trough the clothes department and noticed the smell was delicious. I guess they know how to fool you.. I loved it. I quickly checked the swimwear section and I think I’ll be back to try a bikini on. Also, I can’t wait to spend more time on the shoes because the Footglove and Autograph collections are my favourites and I spotted cute sandals.
On the second floor are the men clothing section, the baby zone (where I met a giant Peppa Pig) and the café. I spotted carrot cakes and lovely furniture so I’ll be back soon enough to test it out.
I know my pics are bad and I’m not a real shopping addict who does reviews and get free vip invites and free stuff to show you, but I won’t apologize. I am a bit reluctant to show things to buy on here because the world is already a big advertisement in motion. By that I mean, we are surrounded by ads and products and brands and our brains just think we are only on this planet to buy stuff.
So, I will only apologize to me. I’m sorry to be the daughter of my parents and be excited about supermarkets and buying stuff from the UK. I guess, I’m so obsessed, I think everything (well, if not all, a lot) that comes out of the shop is awesome and just makes me feel happy, only because in my head, British people also buy the crap and it makes me feel closer to those strangers with a very British lifestyle.
After my little trip, I went to run my main errand of the afternoon, which was to get my grocery shopping from local Belgian farmers, cheese mongers and the like. I’ll write another post about that because it is more in line with my convictions: supermarkets are not actually heaven, they have many, many disadvantages for mainly A. the planet, B. our health and C. our wallets.