Hello guys! My tour around Australia is over sadly. But to make it easy on you, I kept things similar by sharing another kind of diary… My running diary!

While writing the last update (I know, AGES AGO), I discovered that the Nike + app had a coaching feature. Inside the app you can find some training programs to run 5K, 10K, 20K and marathons. How stupid I was to think that it wasn’t free and that I should never click on it? Well, finally I did and I discovered a whole new running plan. It included more workouts than my average two runs a week, so I decided to test it out even if I had missed the first half of it. I kept a little diary of my runs on week 9 just for you! 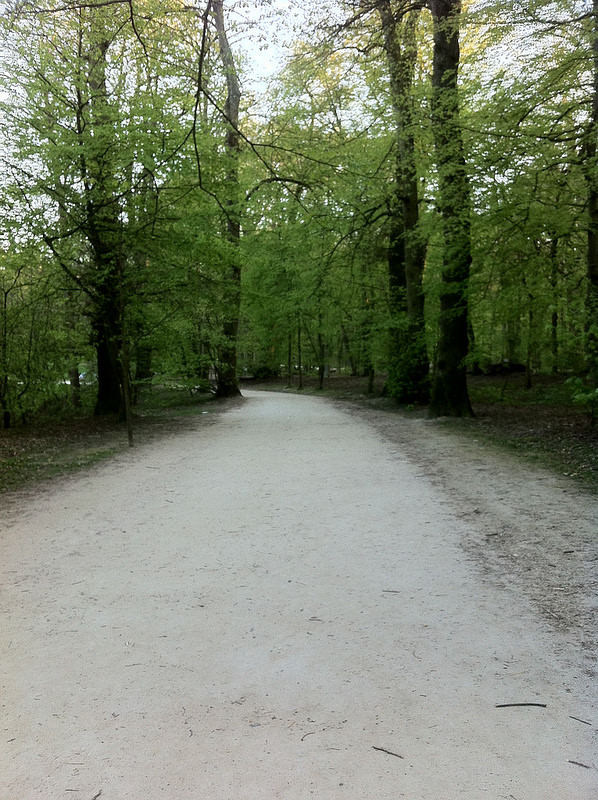 The Coach said to take it easy and have a 6.44K stroll around just to get my heart going. I thought “I ran yesterday, I’m tired. It’s hot outside. I’m hungry. I want to watch The Good Wife. The Good Wife is boring. I don’t want to eat anymore. I’m out”.

I took my lovely shoes out in the Bois de la Cambre Park this time, on an whim. Probably because I want to impress you, partly because I want to be a travel runner and run in lots of different places and see various things and trees and dogs. I felt like I wanted to try all the parks in Brussels. The weather was lovely, not too hot, not too cold and a light breeze was getting my hair messy.
Trying a unusual route (I usually walk it and not run it) was pretty surprising: what I thought was far was actually close and vice versa. I guess I have zero sense of space because when I had ran 4K, I thought “I just went down the stairs and slammed the door!”: I was fast, I felt good and only had to run twice around the lake before heading home to finish the workout! It felt indeed like a very light jog around my neighbourhood!
Time: 19h23
Run: 6,5K in 39 min (actually did a 5K PB in just 29 min!)
Route: ♥♥♥♥♥
Notes: I want a dog that can train with me. I love the smell of barbecues. Looked at all the other runners’ fashion choices (and sometimes lack of a good sports bra which then didn’t make me feel so bad about my own running clothes). Am I addicted to running or am I addicted to the Nike+ app? I’ve got quite a few existential questions to think about. Also, I’m still not hungry. Only thirsty. But I ate a big steak by myself anyway.

The Coach said I have to test my limits and run longer and faster. Phew. I only went out on a patio with a colleague to have some G&T and a mojito. Stayed there for so long, I was unable to go for a 11K run. Totally unable to do anything. I just went home and had a nap before going babysitting.
Time: 13h
Run: 0K in 0 min
Route: ♥♥♥♥♥
Notes: Sun and cocktails are a bad combo when not on a beach.

The Coach said I should go for a nice and slow 6,44K run. What exactly happened was that it was a “I clean the flat/I cook my remaining veggies” day. So first, I had a nap, then I scrubbed and cooked, ironed and washed. Next thing I knew, my friends were soon to be arriving for a meal and I felt guilty for missing another workout. So, I went out for my faster 5K ever in the VUB campus next to my home where there is a rugby/football/whatever field with a running track all around it. You are supposed to have a yearly membership at the university to get in, but with all the sun we’ve been having recently, runners and sportsmen alike invade the field every night and they let the doors open! That means I get to run there pretty much every evening if I wanted to. I love the track when I’m tired and it’s late in the afternoon/early evenings. You run around in circles, I thought it was stupid, but it’s actually pretty cool when you don’t want to think. I like that it’s enclosed so not everyone comes and I think it’s better to run on the ground there than it is on pavement. It’s softer, so it might be easier on the knees? I don’t really know.

The weather was beautiful, the light breeze was refreshing at that time of the evening. My run didn’t start like Monday because I felt pretty tired very quick. When I reached 3K, I badly wanted to stop. I picked up the pace right before 5K and then slow down because I was too exhausted. I ran faster at some stages thanks to all those athletes I was seeing around me. I realized I was quite slow but at the same time it made me think I could go faster once in a while.

Time: 19h27
Run: 5,50K in 30 min (second 5K PB of the week in 27 min!)
Route: ♥♥♥♥♥
Notes: They were many people there training. Either they were running as fast as they could on a short distance or they were practicing in groups. They stopped all the time. Sometimes they ran faster, sometimes not. I thought that it was boring and I felt pretty annoyed when runners were getting way too close to me while racing ahead with their heavy breathing. I guess the 20K of Brussels will be worse than that. Pfff.

The Coach said I had to cross train. I went to the library and I studied. I guess it’s much better for me right now. I had a long walk to get my fresh groceries from local producers and ended up with veggies and 3 liters of apple/pear juice. It must count as cross training. Also, I should say that I practically never sit down at my job, I’m always standing and on the run. I also lift a lot of stuff. I mean A LOT of stuff. That MUST count as cross training.
Time: 11h30
Run: 0K in 0 min
Route: ♥♥♥♥♥
Notes: As I have mentioned many times today to various people, I don’t really have anything to say. 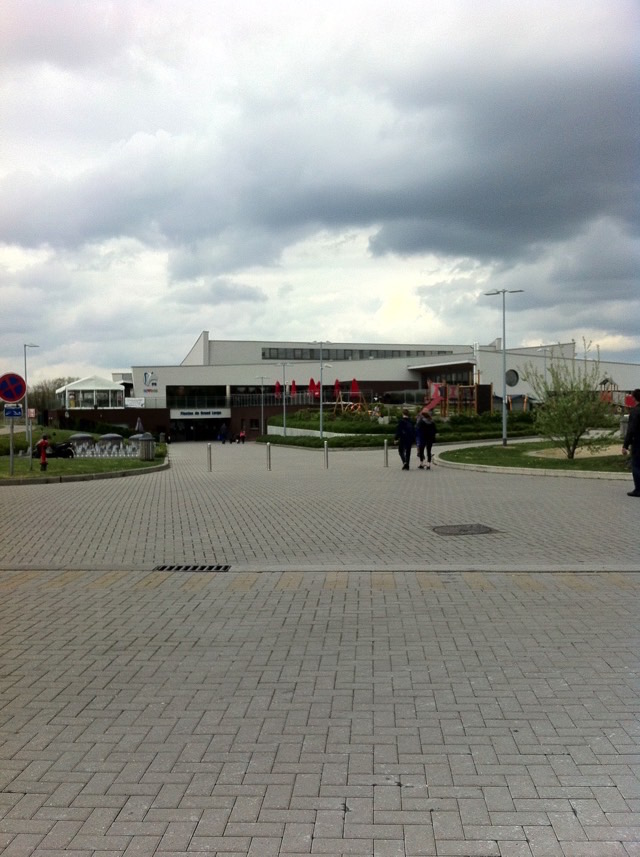 The Coach said I should run quietly for 16K!!! No way! I worked in the morning and met a friend in the afternoon to melt candles (!) I went for a nice 20 min swim in the afternoon. Because of work I felt very tired and my arms were pretty sore. They were too many people in the pool for me to relax properly and really I felt pain and was really tired. I guess it was good for my body still.
Time: 20 min
Run:
Route: ♥♥♥♥♥
Notes: Never go to the pool on Saturdays. Ever. Also, I don’t like the new pics of dolphins etc. they put straight IN FRONT of the bay windows! It blocks the light and it’s plainly stupid. Imagine during the winter, it must be pretty dark! Shame shame shame. Borinagification du Montoisis, c’est vraiment dommage. 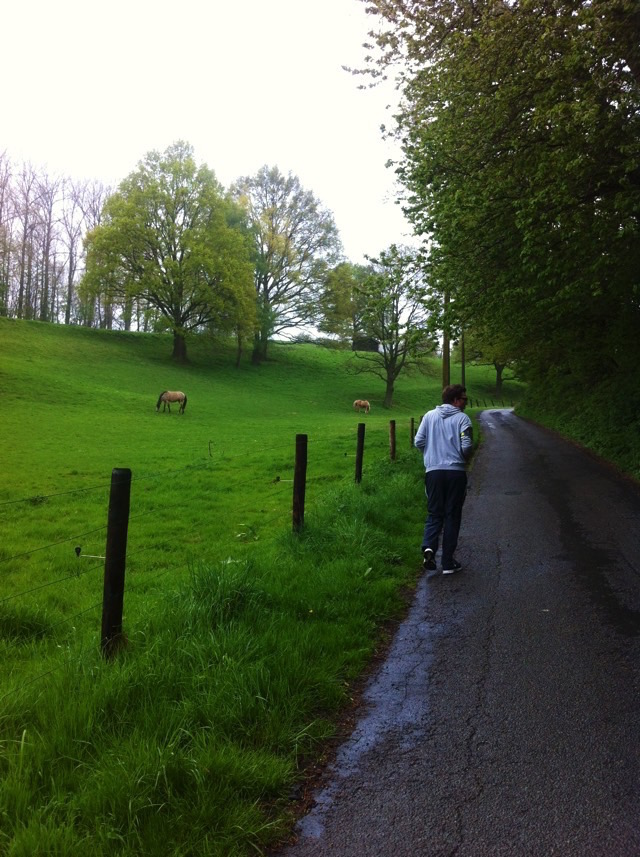 Sunday is resting day for the Coach but I went for a run with the bf in his hometown! His cousin had organized a run for her scout group so we thought it would be nice to join in. We missed the big start and ran by ourselves in the countryside. The route was 6K and we did it twice, only the second time, we missed the signs and ended up climbing the Mont-Saint-Aubert (230m), it was hard but worth it! We felt great afterwards even if we still had a nap in the afternoon…

The route was great even if it was raining a bit. The fields looked very green and the scenery was peaceful. Running in the countryside is kinda relaxing as well: no cars, no noises.