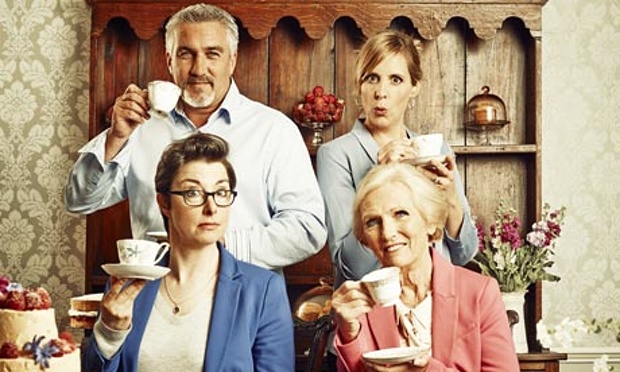 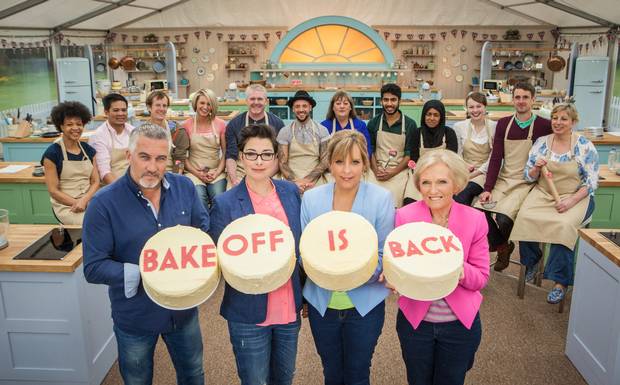 It’s August again! That means we’ll be back in school in no time, autumn and its mushroom picking strolls in the woods will become our new weekend’s outdoor activity in lieu of wild Friday nights filled with mojitos on the balcony, and the guiltiest pleasure of all: we will finally be able to have some rest after having sunbathed all summer – who are we kidding really? Yes, it’s time to get cosy in front of “the bake off” with a warm cup of tea in our hands while the rain pours down outside.

Basically, I’m excited about the return of The Great British Bake Off (GBBO), a reality show that mainly is a baking competition that airs on the BBC (first TWO now ONE) where 12 perfect strangers fight in flour and sweat to become the best amateur baker.

light the show on fire

ON YOUR MARKS, GET SET, BAKE!

Every weekend, the amateur bakers gather up in the bake off tent to get close to the oven for two whole days. In each episode of the show, they are challenged to demonstrate their skills in three bakes that are centered around a theme (patisserie, bread, advanced dough, biscuit ….)

The competitors show off a bake they have been practicing at home. The bake is not known to the bakers on the day, so they have to be ready for anything that they can customize to their own liking or just keep basic. Whatever.

All the contestants receive an identical recipe with “missing parts” of the text that is supposed to reveal if they master all the skills of a professional baker. Icing is an essential skill to have if you want to impress the judges.

The showstopper is my favourite activity. The participants must show great creativity and come up with a great design and taste in a bake of their own creation. They can mix up the “categories” such as baking a sponge cake with biscuits, adding touches of meringue or pâte à choux…

After having been given their challenge, the judges leave the bakers to their work.

Then, when the time is up, they have to

To let the judges do their own work:

Yes they take bites of the cakes as well.
Every week, one contestant is eliminated and another one is

WHY THIS SHOW IS GREAT:

it gives some basic life lessons

it doubles up as an oven staring contest

Words like “soggy bottom”, “under proved”, “under worked” will become part of my regular vocabulary until october at least. I will laugh my eyes out at every line Mel & Sue will throw at us and cry over failed bakes and rejected bakers. I will lovingly admire the background of the show dreaming of having a generous slice of carrot cake in a cosy kitchen in a tent outside a nice National Trust castle with a cute fridge and flowery tea set.
I hate cookery shows in general, I find them utterly boring. But this one? It makes me feel and do all kinds of stuff! Like this: 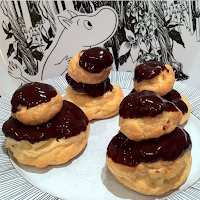 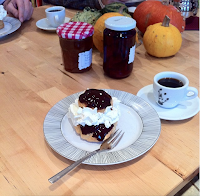