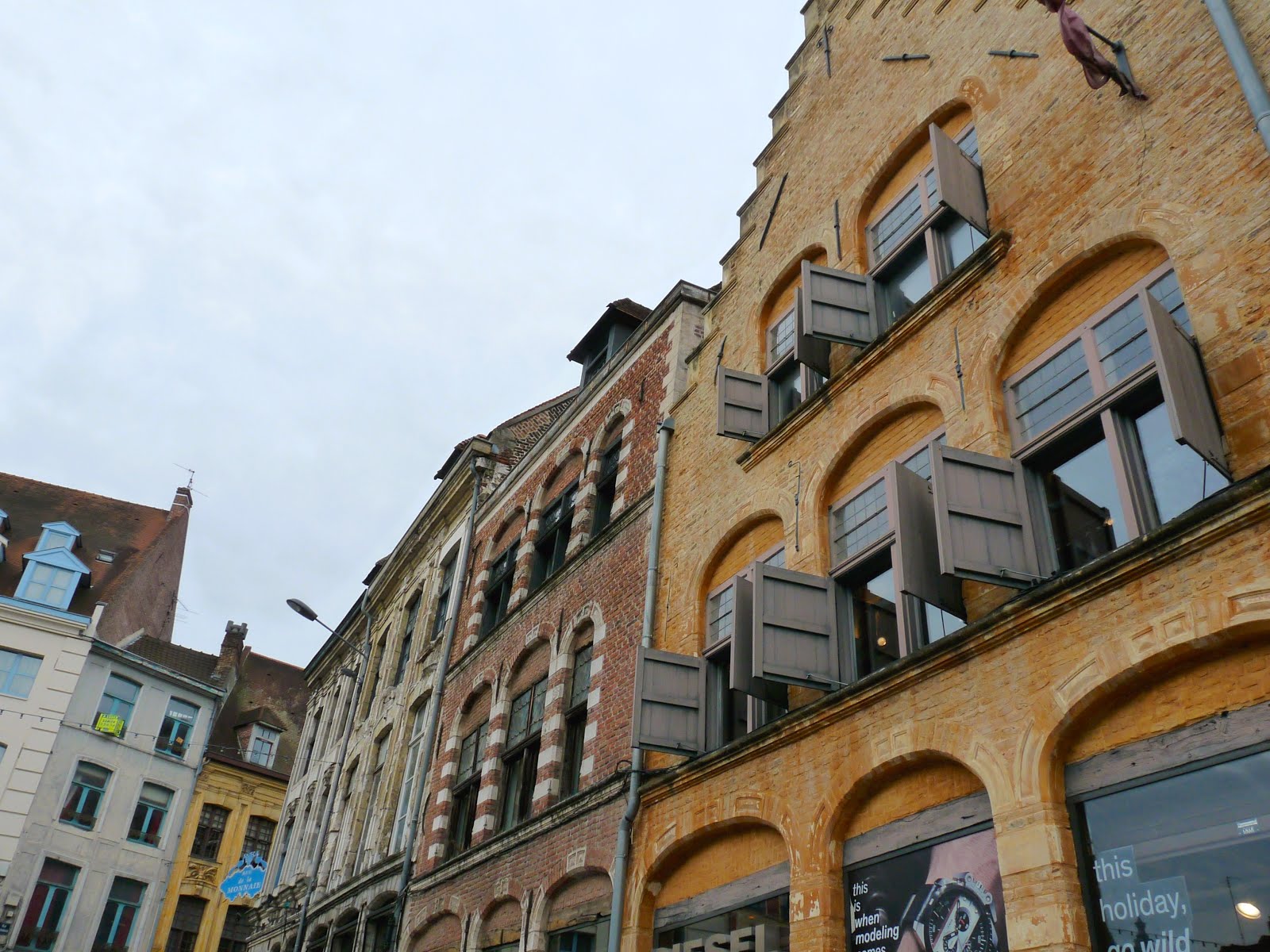 I left you standing in front of an oyster bar the last time but what really happened in Lille is that I kept on walking and snapping pictures of bricks. 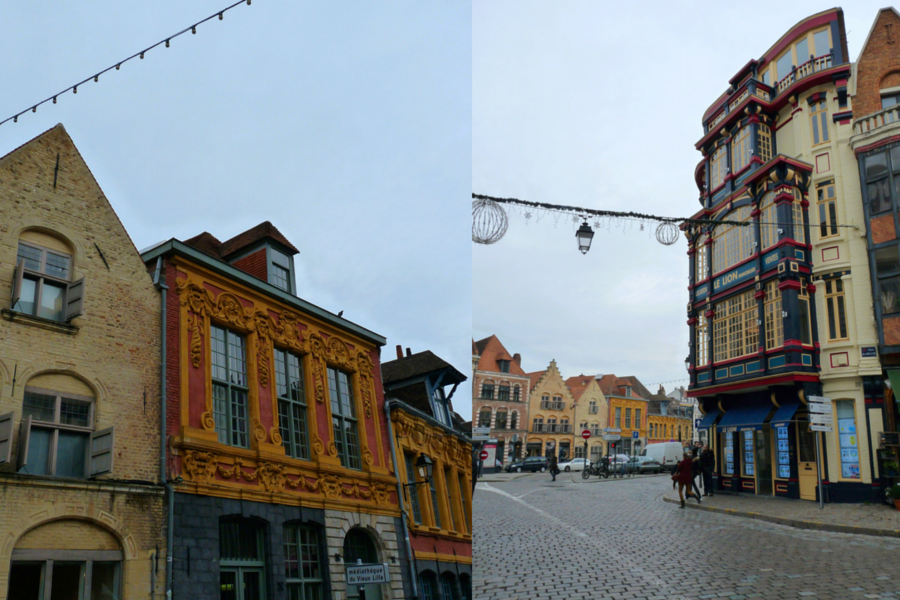 I walked past the Place Louise de Bettignies to reach a museum I had planned to visit. Despite the cold and ugly (very ugly) weather, I was stunned by the colorful houses and the interesting architecture. 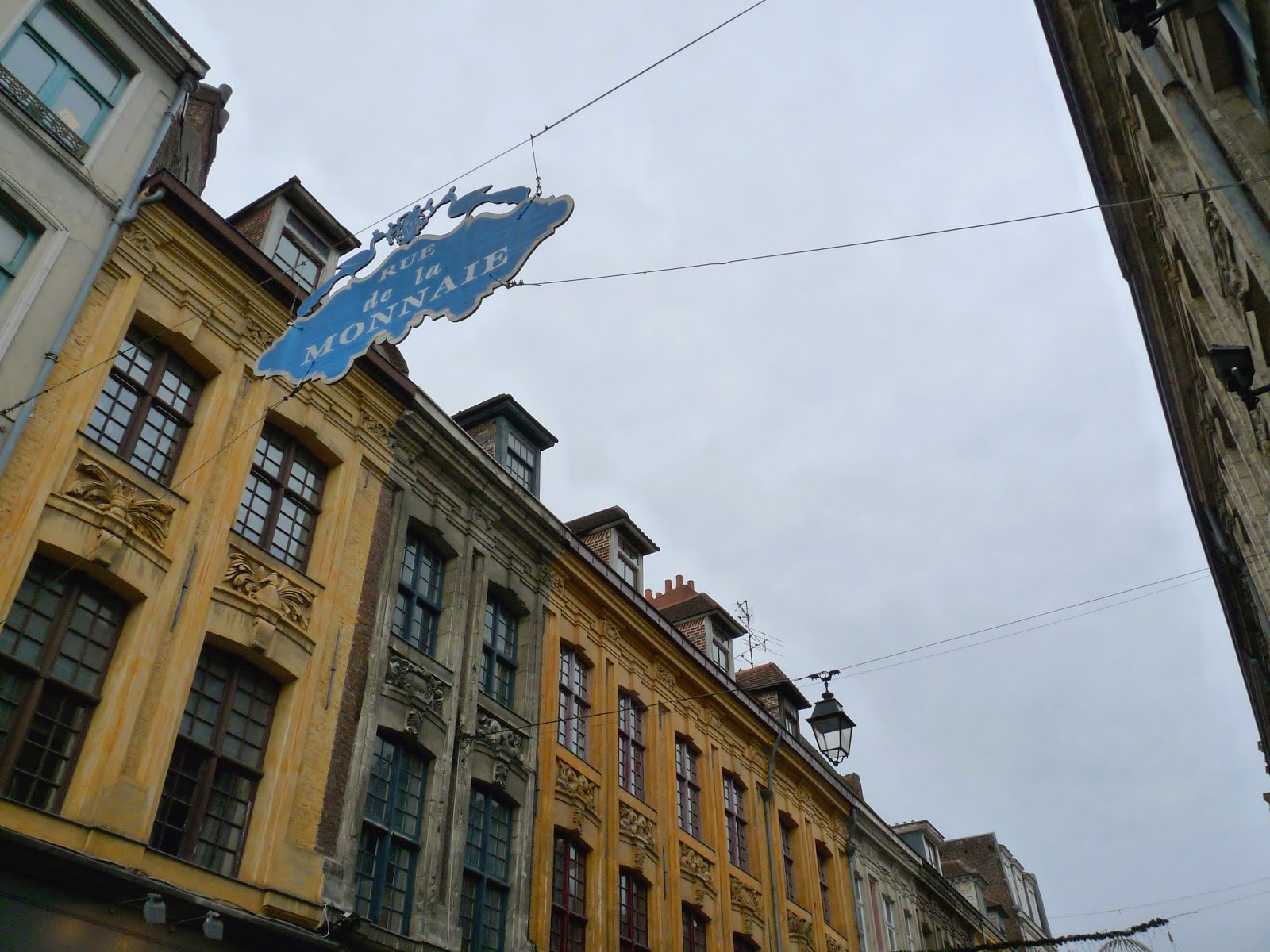 I know that by that time, I had almost skipped lunch but I didn’t let hunger get to me and entered the Rue de la Monnaie, where the museum was. 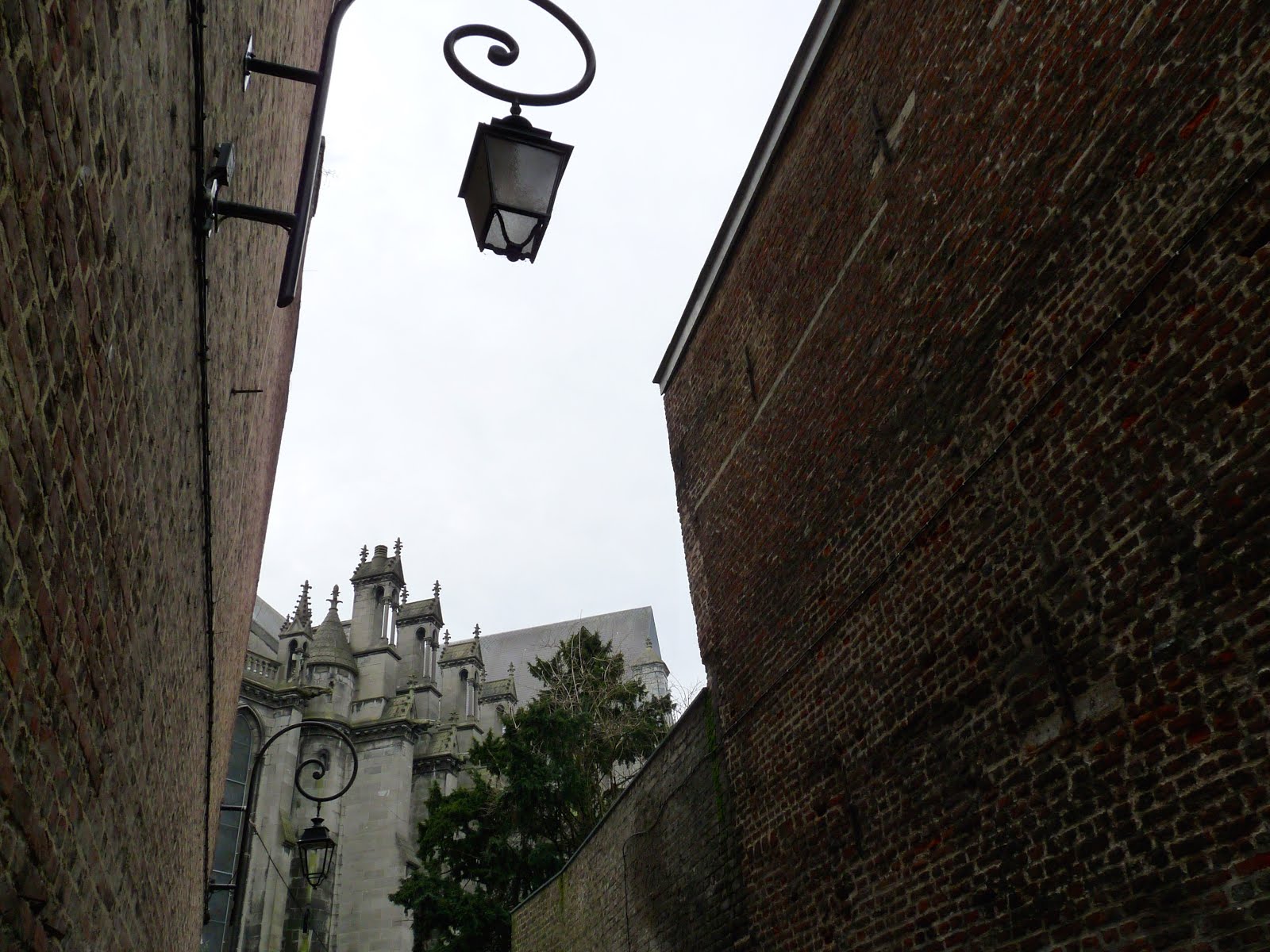 Just opposite the museum was this little passage called le petit passage de la Treille. It led to a church and a little park. When on the other side, helped by my little guidebook, I tried to imagine how it was when the ancient canal du cirque (now completely dried) was still running behind the back of the houses. I saw remnants of old wooden bridges that the inhabitants used to cross to reach the surroundings of the church. 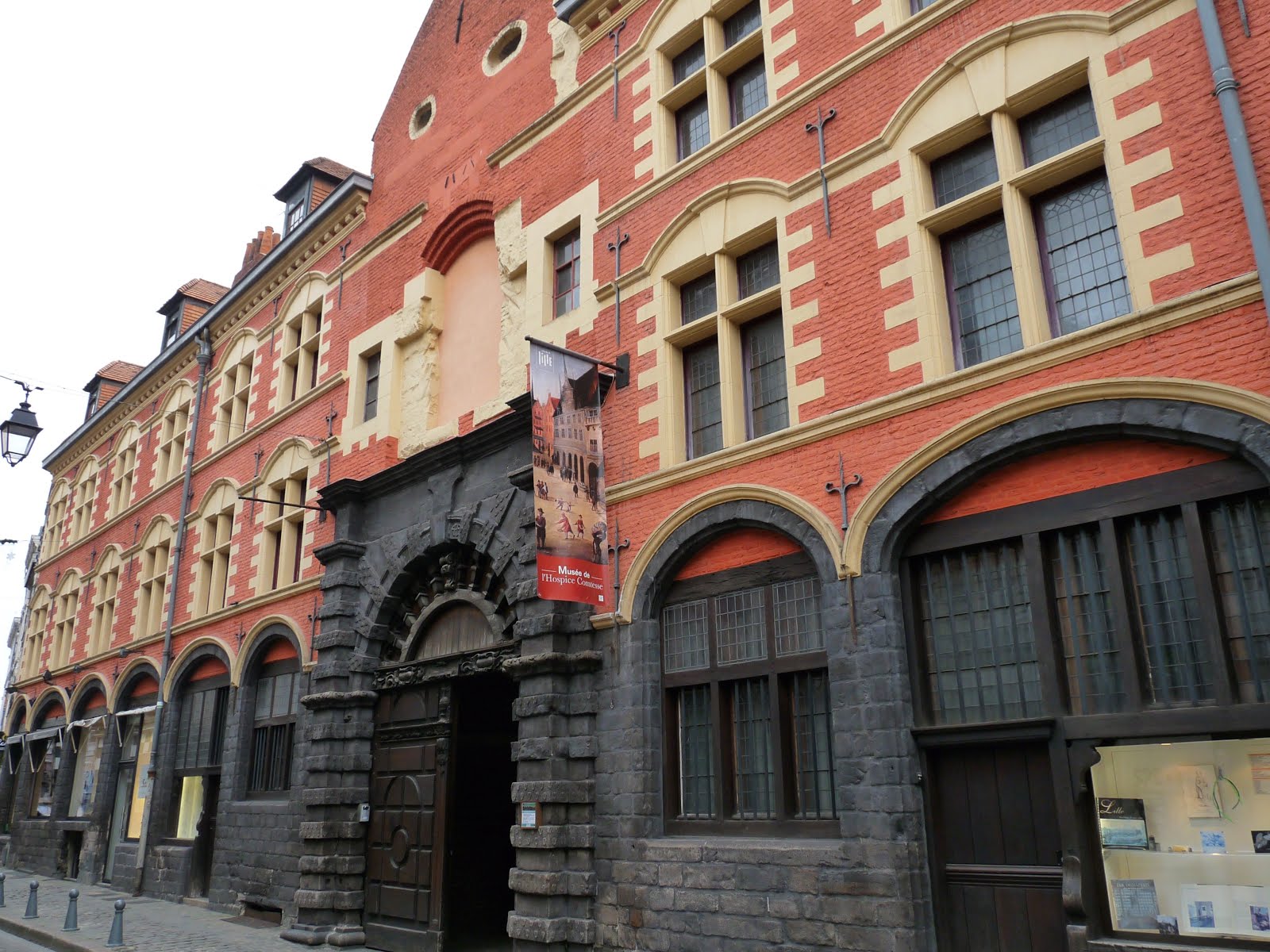 Finally, I found warmth and the smell of terebenthine at the Hospice Comtesse. It didn’t cost much, something like 2,60€ and I was the only visitor at the time. I love that because it means I can take all the time I need to examine everything or in this case the beautiful tiles that ornated the walls of this old hospital. 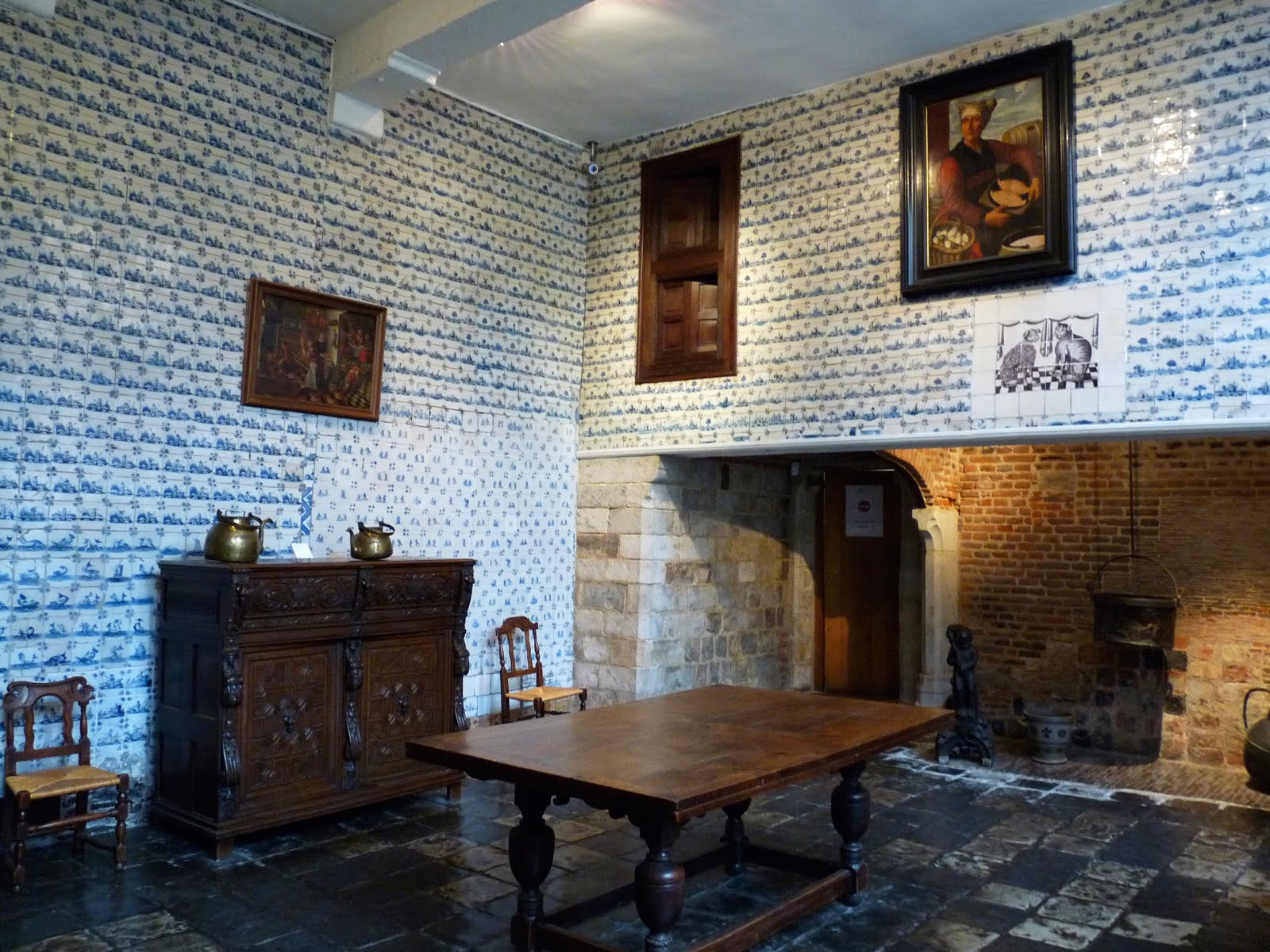 The old hospice was founded in 1237 by a Comtesse. The building is beautiful and is a mix between a Flanders style house and a monastery. I wasn’t lucky enough to see the old salle des malades (the patients’ hall), but I was told it was very impressive. 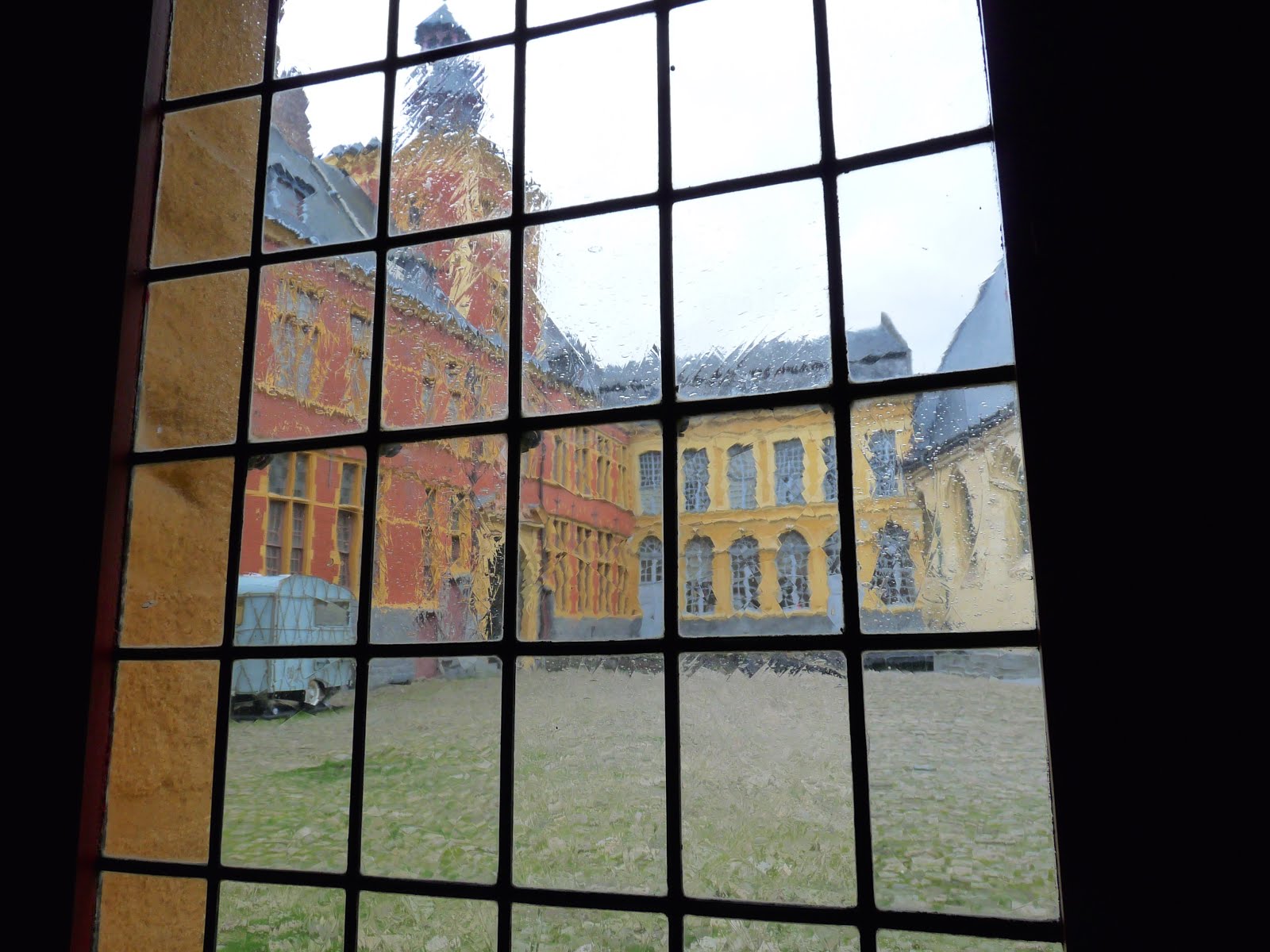 As I said, I loved the tiles that made the hospital more hygienic at the time but also the beautiful rooms that are very well preserved. I loved the smell and all the little everyday objects that were shown to remind us of the life our ancestors led in the past. 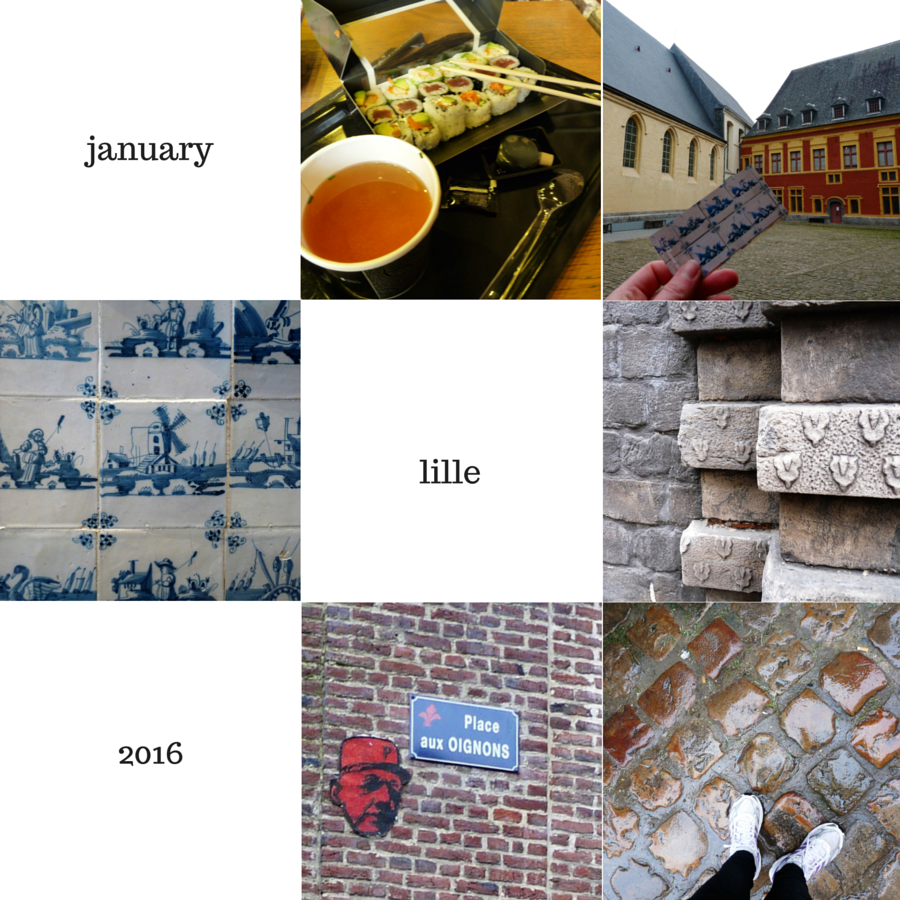 After my visit, I had lunch at the SushiShop, place Louise de Bettignies. When I was well rested and fed, I exited the shop only to find out it was raining cats and dogs! I felt very cold and my hands were getting icy from the wind… I refuged myself into the church that, I was surprised, had a very modern entrance I hadn’t seen the first time around. Then, I followed the rue au Péterinck where weavers used to have their shops in the 18th century. 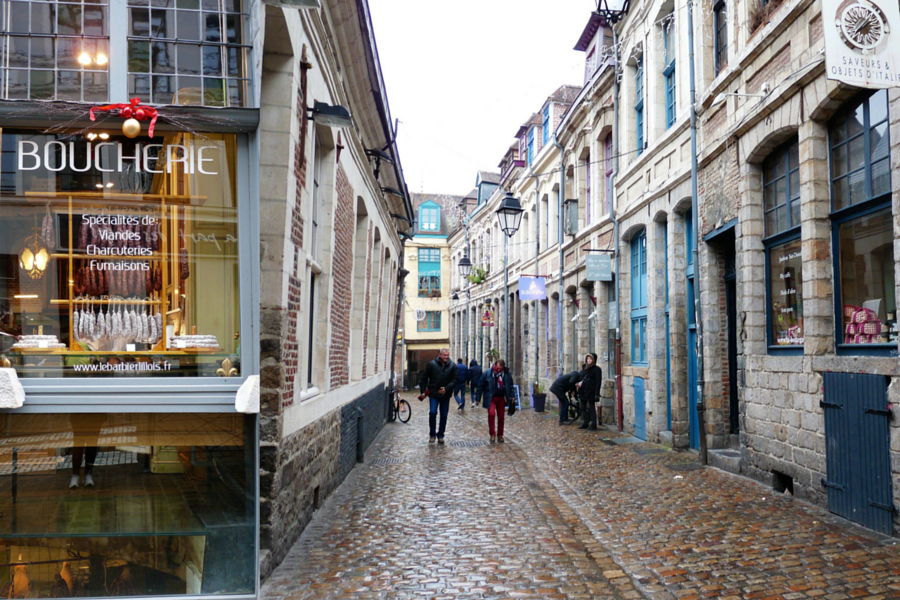 The weaving rooms were situated on a low storey between the ground floor (shop) and the basement. Well, I guess it was actually the basement but as you can see on my photo of this beautiful boucherie (where I wanted to buy all the saucissons!!), the buildings had little windows that opened on the entresol. 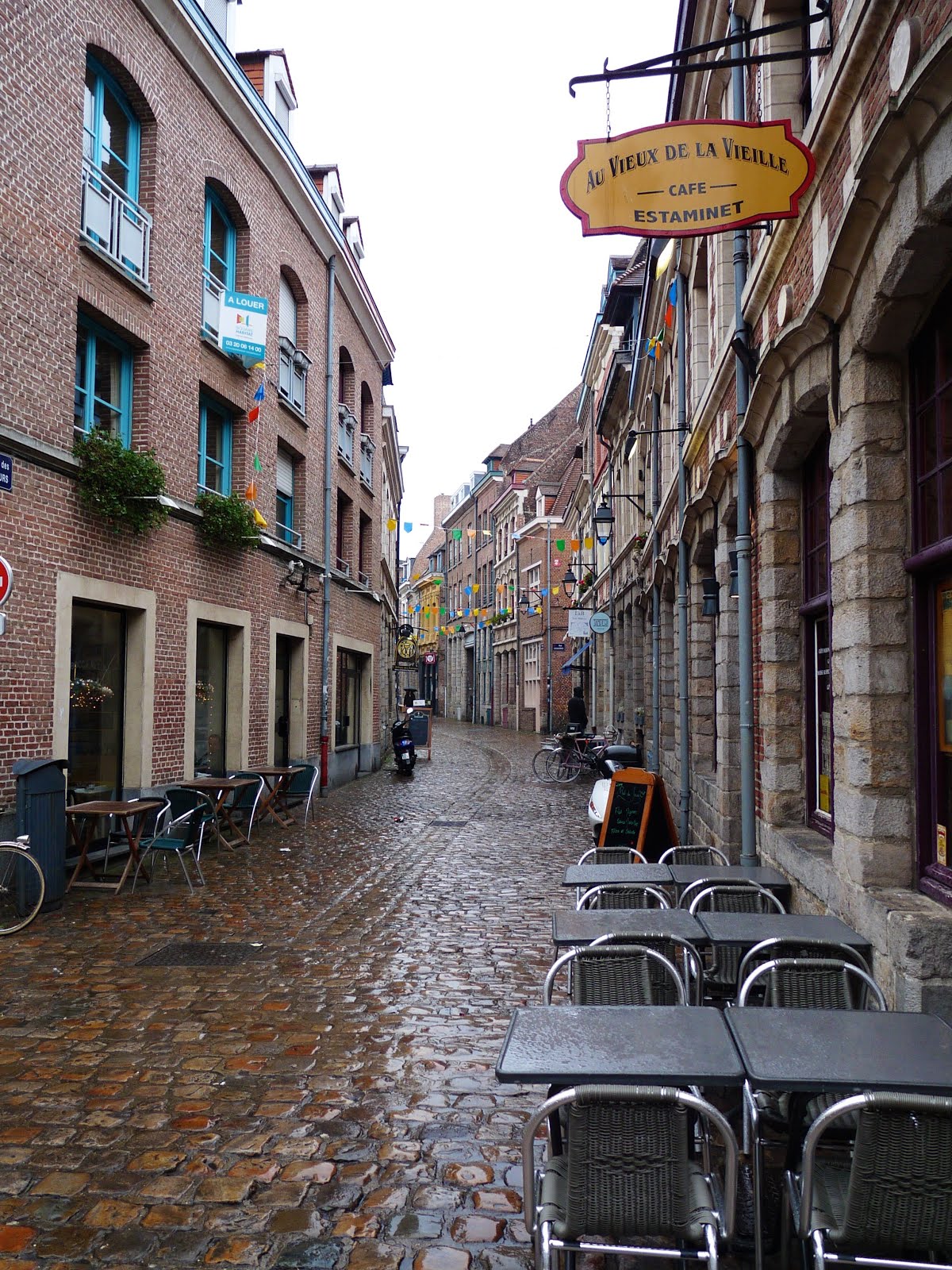 On the Place aux Oignons, I decided to end my tour because I wanted to do a little more window shopping : I ended up buying homeware. 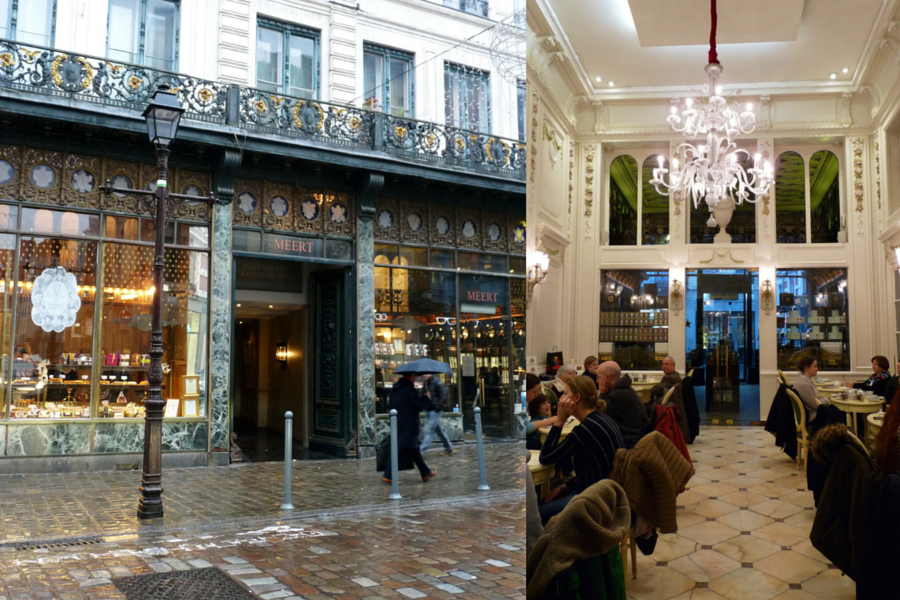 Before heading home, I had a little tea and éclair at Meert, a very old sweets shop. It felt very fancy and special as I was on my own, but as it was pouring down outside, so I enjoyed my little reading break in the warmth. 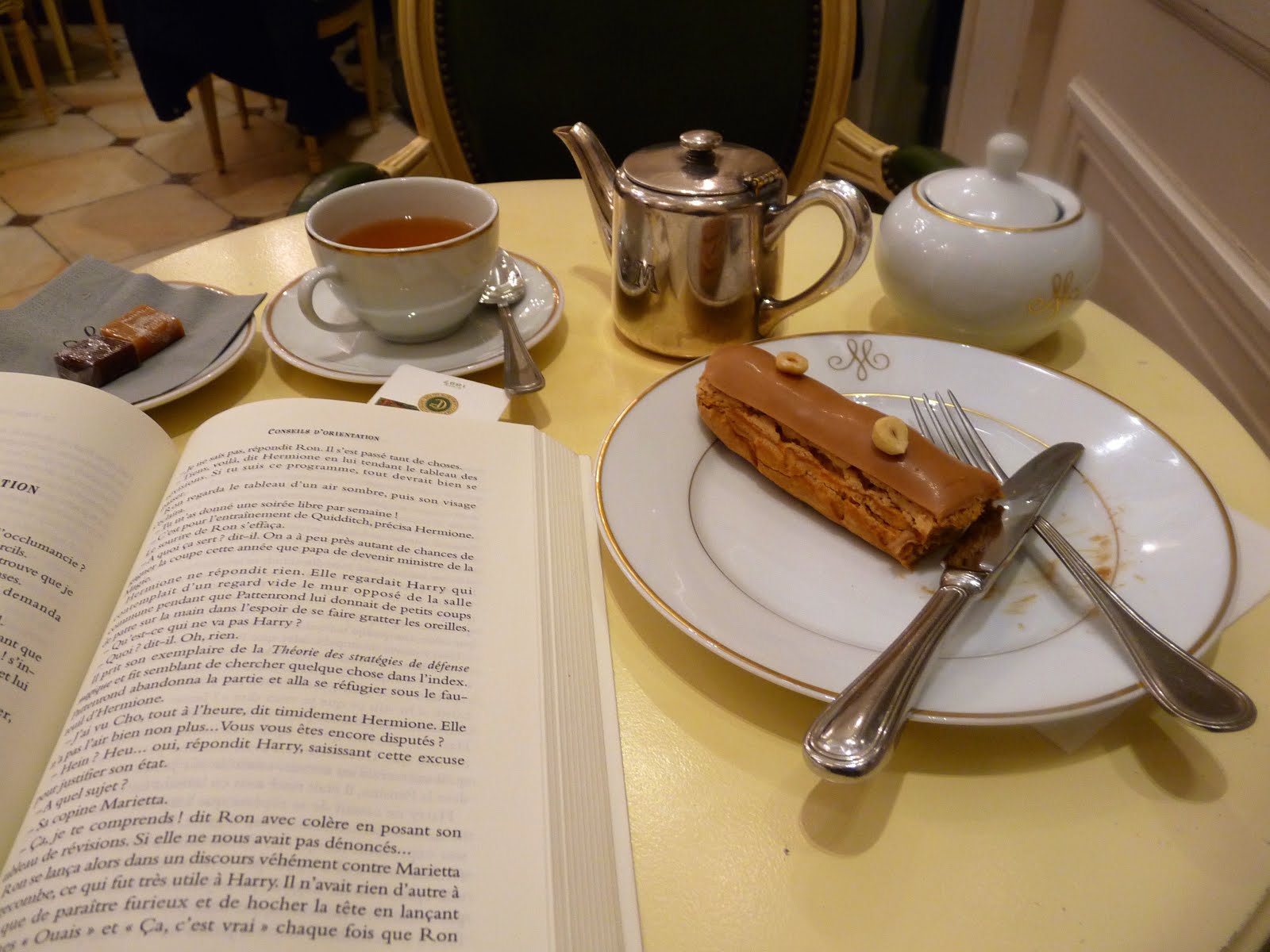 I made a very last stop at the shopping center Euralille before catching my train home but there was so many people at the end of the afternoon, I didn’t enjoy it one bit and I left after two minutes inside!

That was it for my little day of being a tourist and I enjoyed it a lot. It was very relaxing and interesting – I learned a lot. There are three more walking tours explained in my guidebook so I hope I won’t forget to do them next time I’m in Lille!