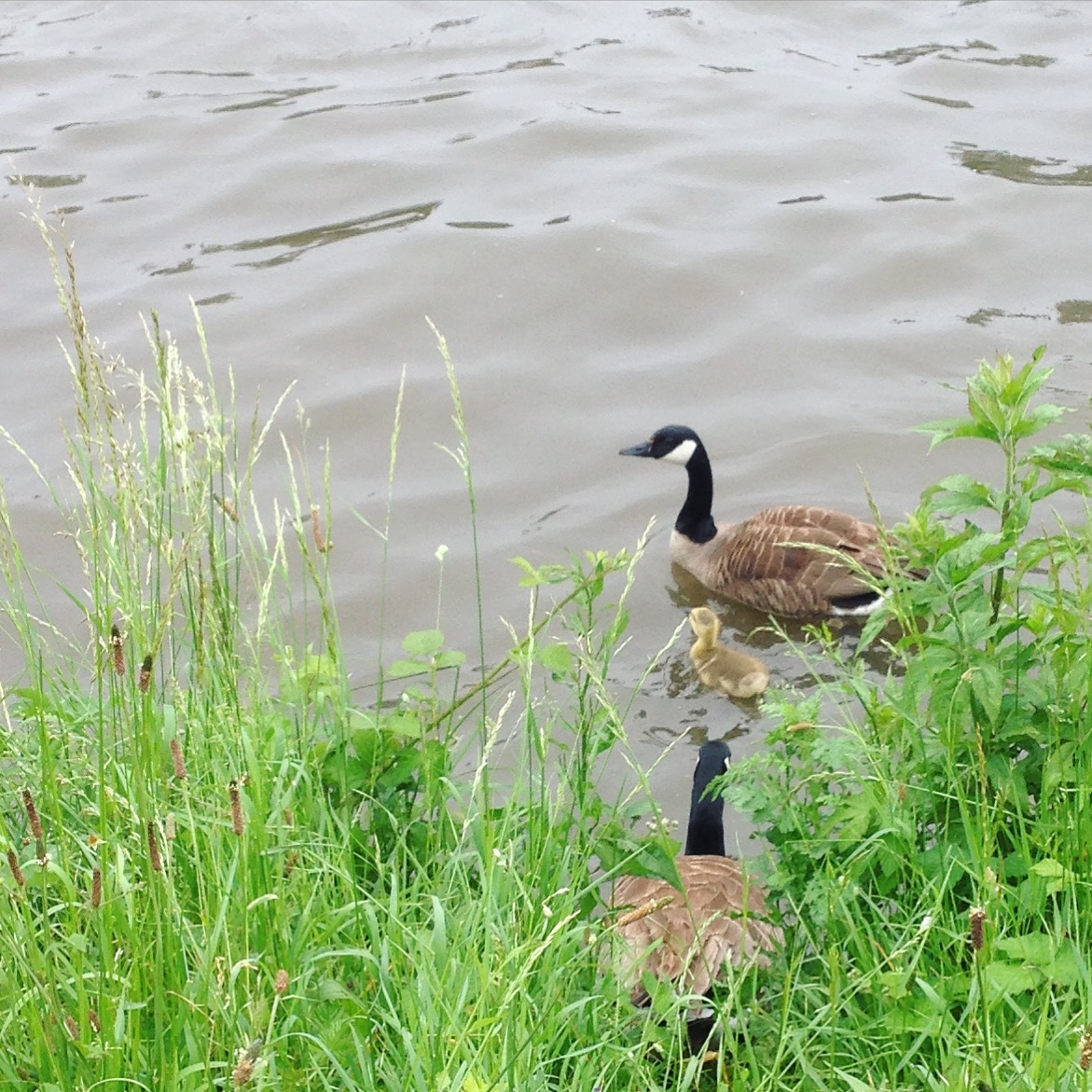 So long dear readers! I left you in May while I was busy procrastinating and having such a hard time getting things done. Well, it’s been two months since then and life got the best of me and left me with pure exhaustion. Hell, summer isn’t over yet which means I’ve still got so much to do on top of everything else… Hence the title of this post: I’m readjusting to it all. It’s funny because I’ve just checked the dictionary to see if this word meant anything in English and it does: its signification is “to change in order to fit a different situation”. It certainly does suit this moment very well.
So, let’s get back to what you missed all this time – only the good stuff, I’m keeping the bad stuff for my therapist:

In all of this madness, I have managed to do a little thing that I’m good at doing. With this little DIY job, I got to work hard and see the end results pretty fast. It was a little pick me up to remind myself I can achieve stuff. Ta-da! 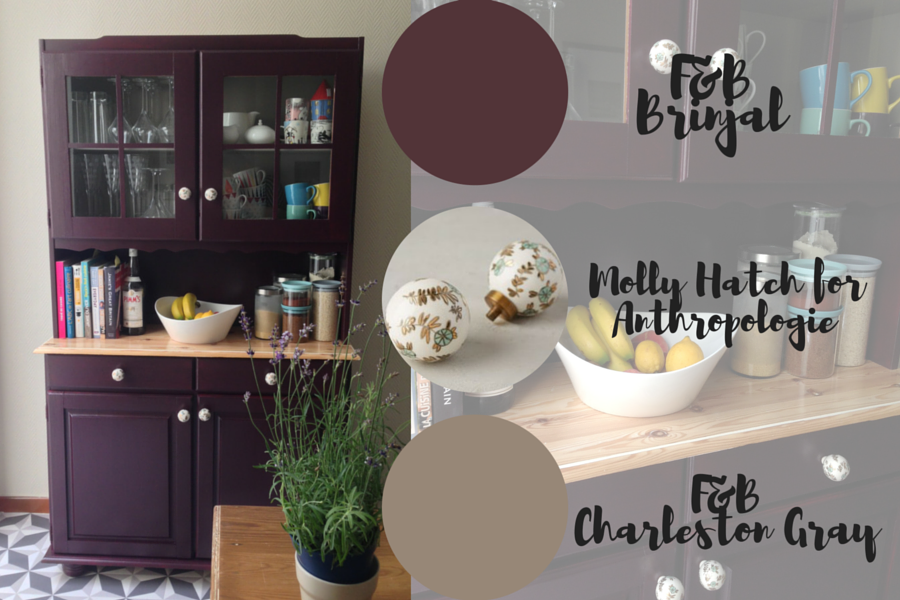 Check out this post to see the original state of this dresser.
The back of this dresser was in a bad shape so I replaced it before sanding the whole piece down. I applied at least four coats of paint both in and out. Finally, I installed the new knobs I bought on Anthropologie.com – I snatched them in the sale and it appears they’re not available anymore. The result is not perfect by any means – I applied the paint with a brush so you can totally see the strokes – but adding those very fancy knobs makes it all sophisticated and expensive!

For the little anecdote, this dresser was made out of pine in the 80’s by a local woodworker on the request of my grandmother. She gifted it to my mum when she moved in with my dad as they didn’t have much furniture in the house. My mum painted it all white and stenciled two red windmills on the doors – apparently the theme for her 80’s kitchen was red and white! Before I was born, (I’m guessing they had installed a fitted kitchen at that point) they painted over the red windmills and moved the dresser in my nursery and it was used as a wardrobe up until 1996. Since then, it gathered dust in the garage, then was moved to a barn… I’ve got it now, until I install a super fancy fitted kitchen in a new house…

TANYA BURR’S GOT A NEW KITCHEN
Speaking of kitchen, have you seen Tanya’s? You know I loved her old one but the story is, she didn’t like it much – she’s the one living with it you know… So around the time that I got myself a proper working sink, the Chapmans ripped their old kitchen off to build an extension. They lived without a sink for two months – so much more time than me, but they’ve got so much money they actually slept in hotels on the weekends and ate out in fancy restaurants all the time!
Anyway, here’s a little fanatic arrangement of what their new kitchen looks like… 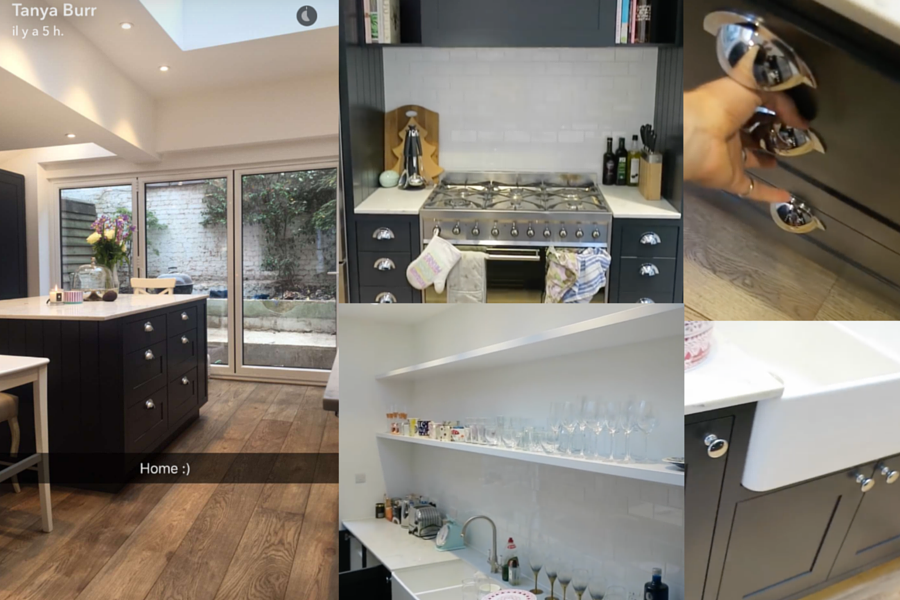 I’ve got to say that while I wouldn’t have chosen this layout, they really did a nice job. I love the flooring, wood all the way if it was up to me. Jim even said in one of his videos they were going to replace the floors of the whole house I think (yay!) I really like the tone of the wood. The builders apparently got the wax/varnish wrong and had to sand it and do it again – good result in the end.
I love the knobs and handles (will buy similar ones for my doors) and the Carrara marble worktop is very elegant. Seeing the open shelving gave me an idea to do the same in my DIY kitchen but with smaller shelves. I really appreciate all the room they’ve got to store their stuff. The units look so well made and sturdy, I’ve got a major kitchen envy. Their units were painted with F&B ‘Railings’ apparently which gives a very modern but classic and elegant vibe to the ensemble. Well done, Tan!

On the extension part of the whole thing… I am so in love. Extensions are a big thing in London so I guess everyone’s doing it. I’ve seen my share of kitchen and bi-folding doors – stalking real estates websites is my night job – and it is totally what I would want do to a row house!

A BABY PANDA
One of the awesome things that happened last month and that got me really happy despite difficult times was the birth of our very own Belgian panda, Baby P. He is the cutest thing and the zoo where he’s in has been handling social media like a pro! 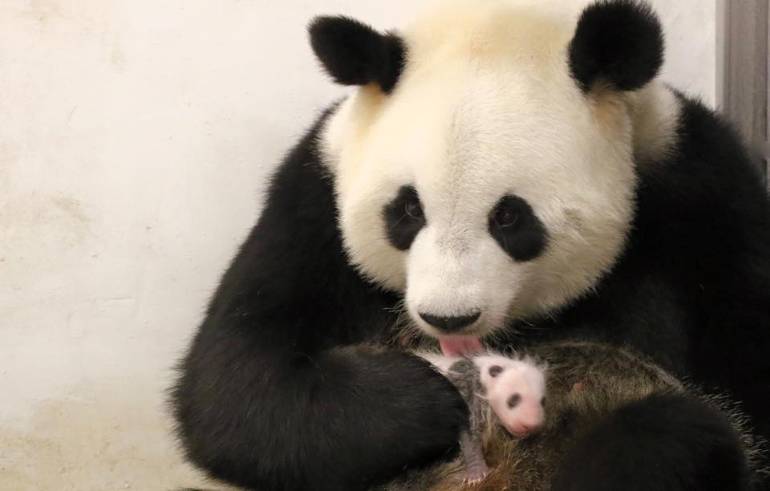 They’ve been posting videos and little updates written by Baby P. himself since his birth and it’s just perfect! Check out his little diary and a few of his videos – it will melt your heart!
ALL IN ALL
I love going to the museums – you can see how much I love houses haha! – I found the most exquisite pancake recipe – My parents’ dog is a sunshine – My hands are itching to paint/decorate/build/destroy things in the house – I want to buy all the pretty things – I need a vacation (soon) – Fargo season 2 is pretty good! Kirsten Dunst smashed it! – I started to play piano again – I’m finally wearing shorts because the nicer weather – I stopped reading books and started reading comics – can’t think of anything else to say….  see ya soon! 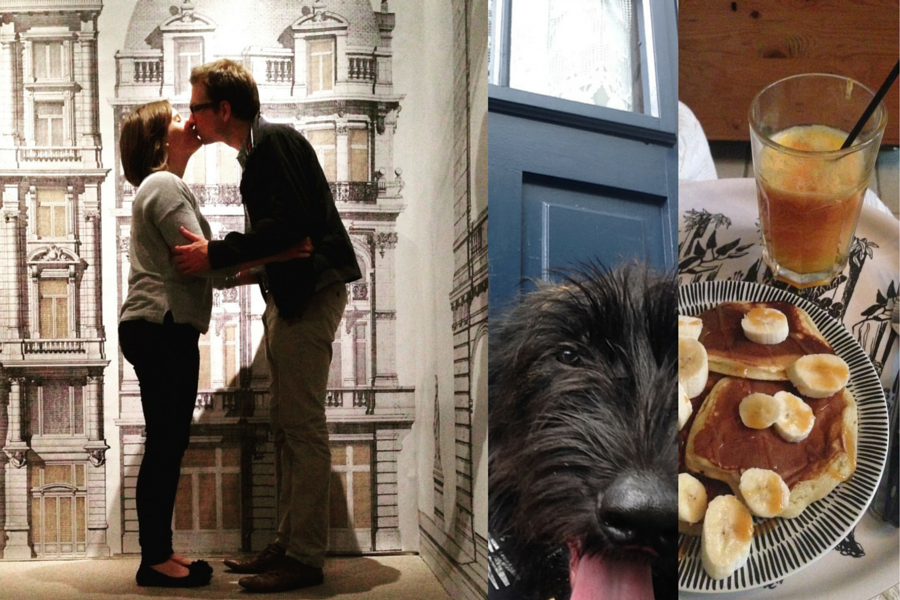