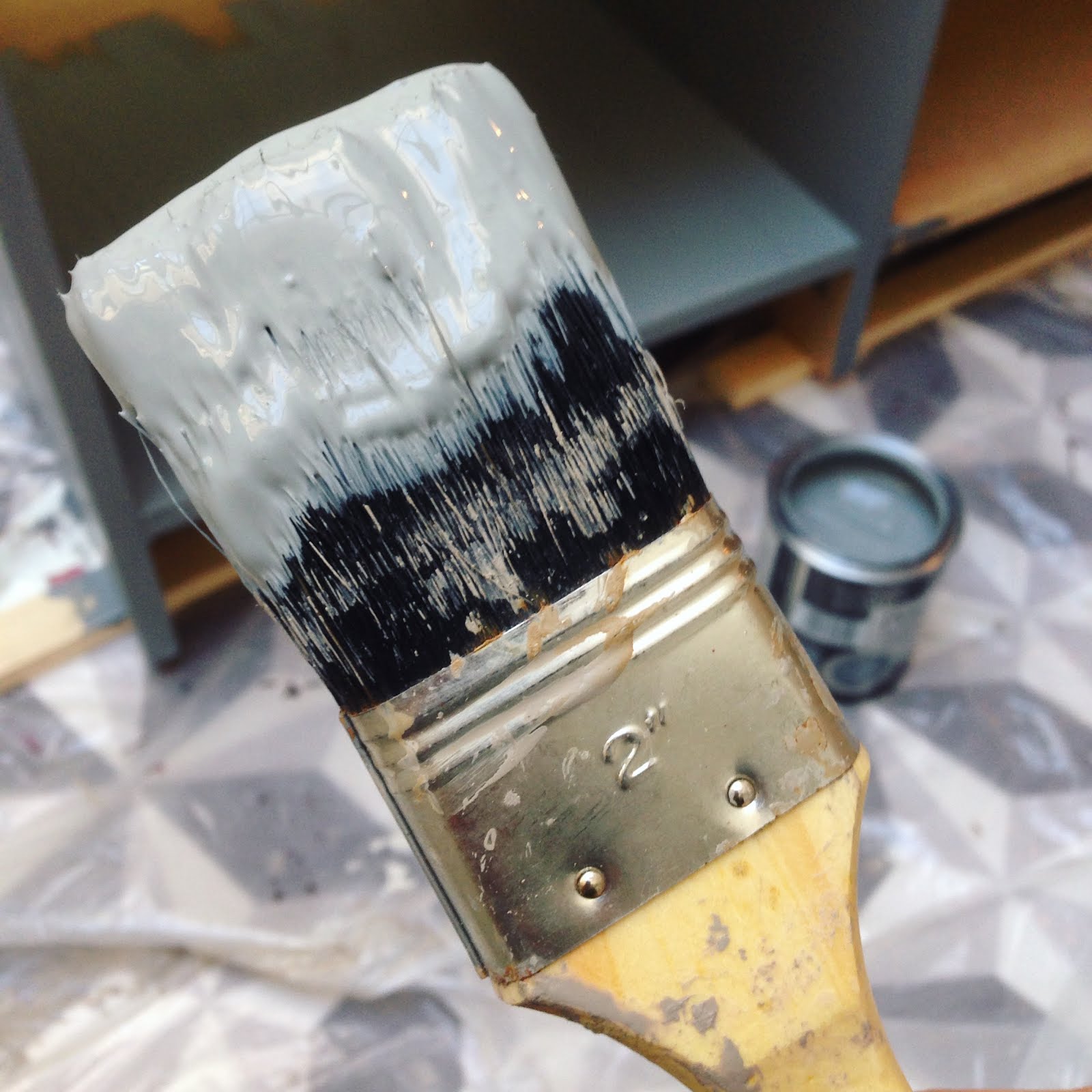 Last year, I debated whether or not I should write about our house makeover. I thought that all my photos were really bad and as I couldn’t really explain to you the how-to’s, I wasn’t really sure it would transpire well into a post. Anyway, now I changed my mind. Interior posts are always my favourite posts on blogs, why not on mine?!
When I left things off, the kitchen essentials had just been fitted. The bf had installed the sink and faucet, as well as the countertop. See the post>> But today, I just want to go back to the beginning, for the sake of documenting the awesome job we already forgot we did there! The walls were an ugly hello and orange color, the kitchen units weren’t very practical for us and the layout was really bad in my opinion. Also, I absolutely hated those tiles on the wall. And those on the floor as well. Ew! The spotty white ones were okayish but the dark brown ones were an absolute no-no. 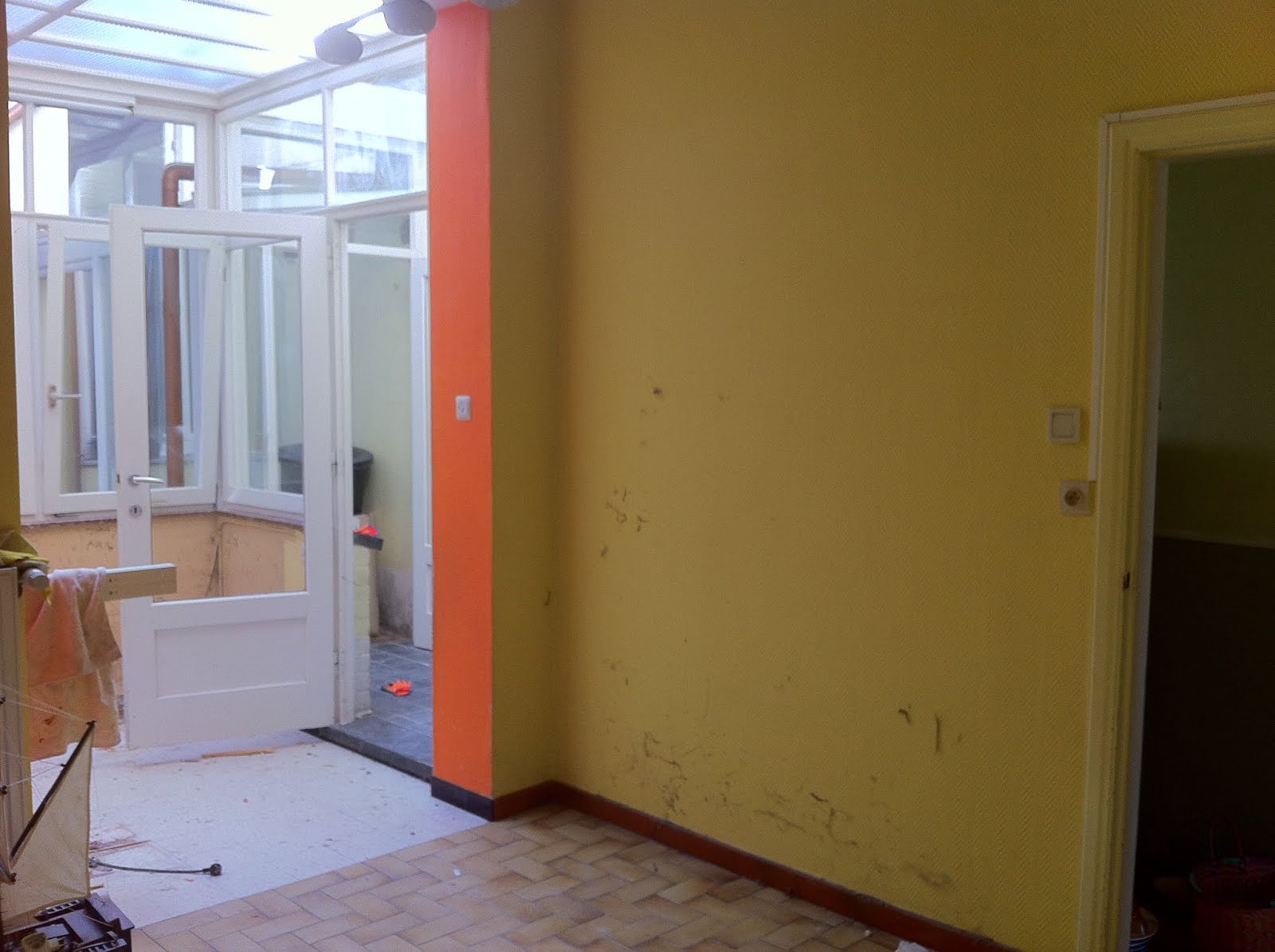 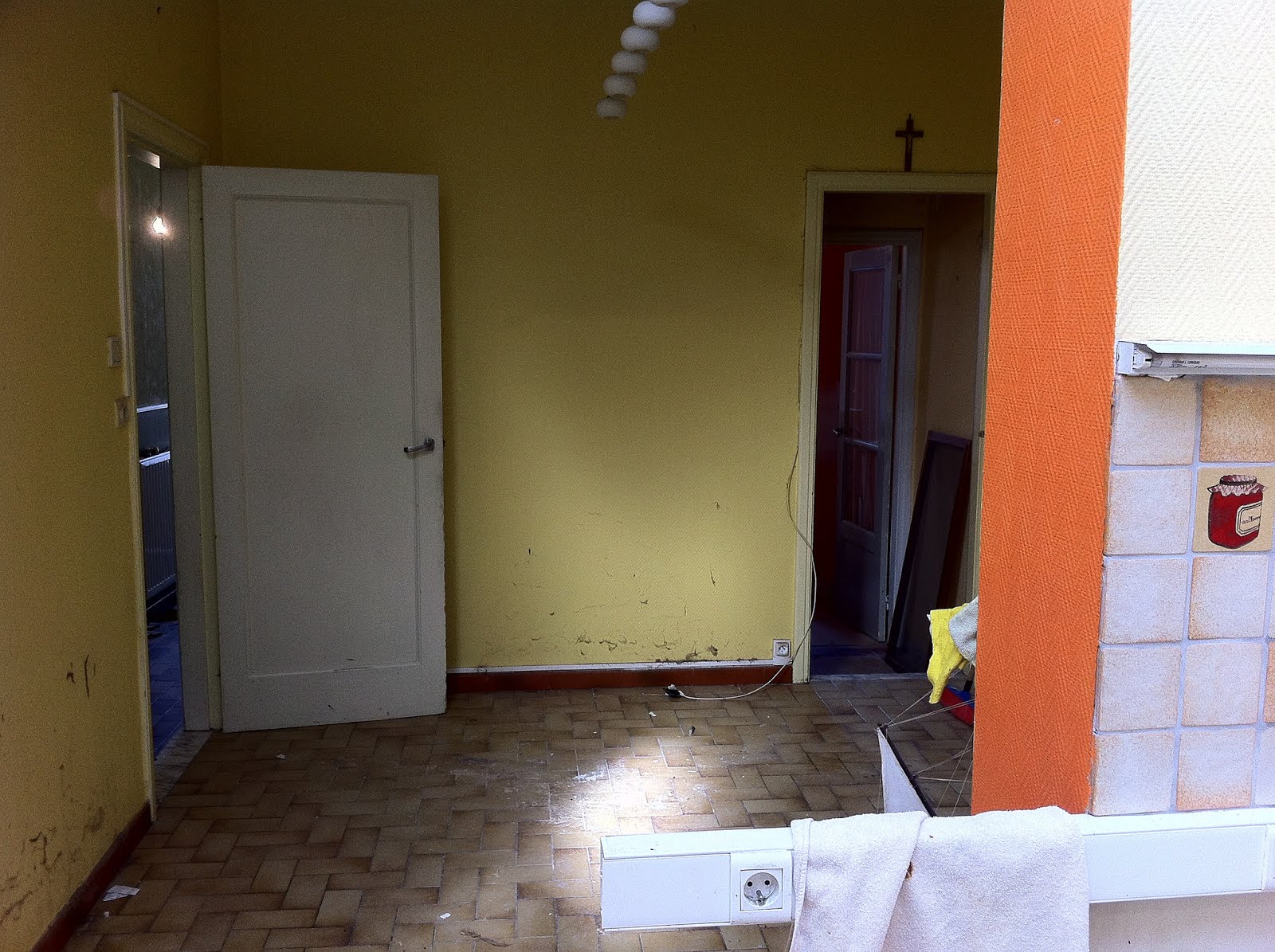 Obviously, we got rid of the units and deeply scrubbed everything. We also dismantled all the doors because it wasn’t practical at all and it made the room smaller. Also, I didn’t want to paint them #savingtimeandmoney – bonus! 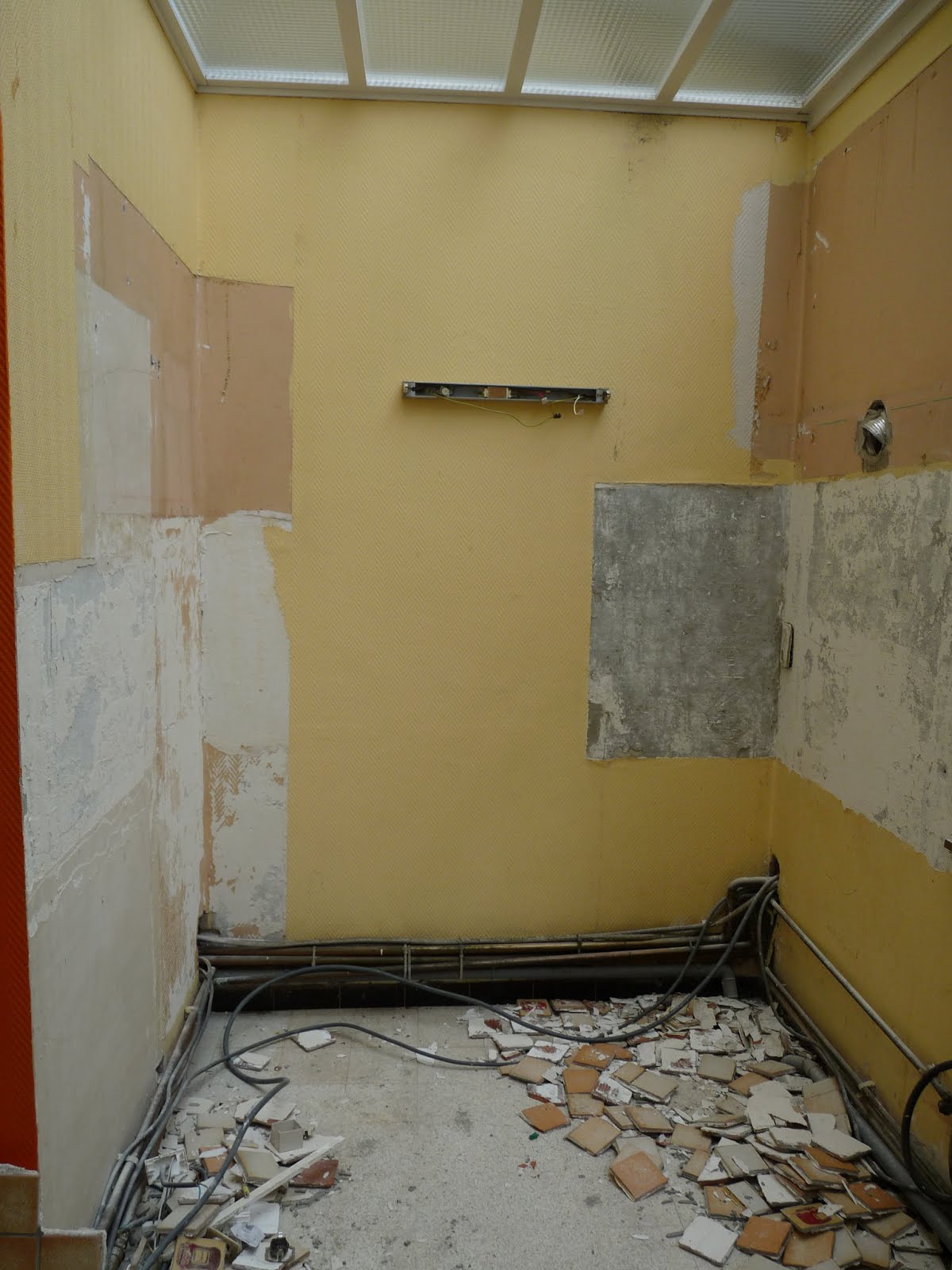 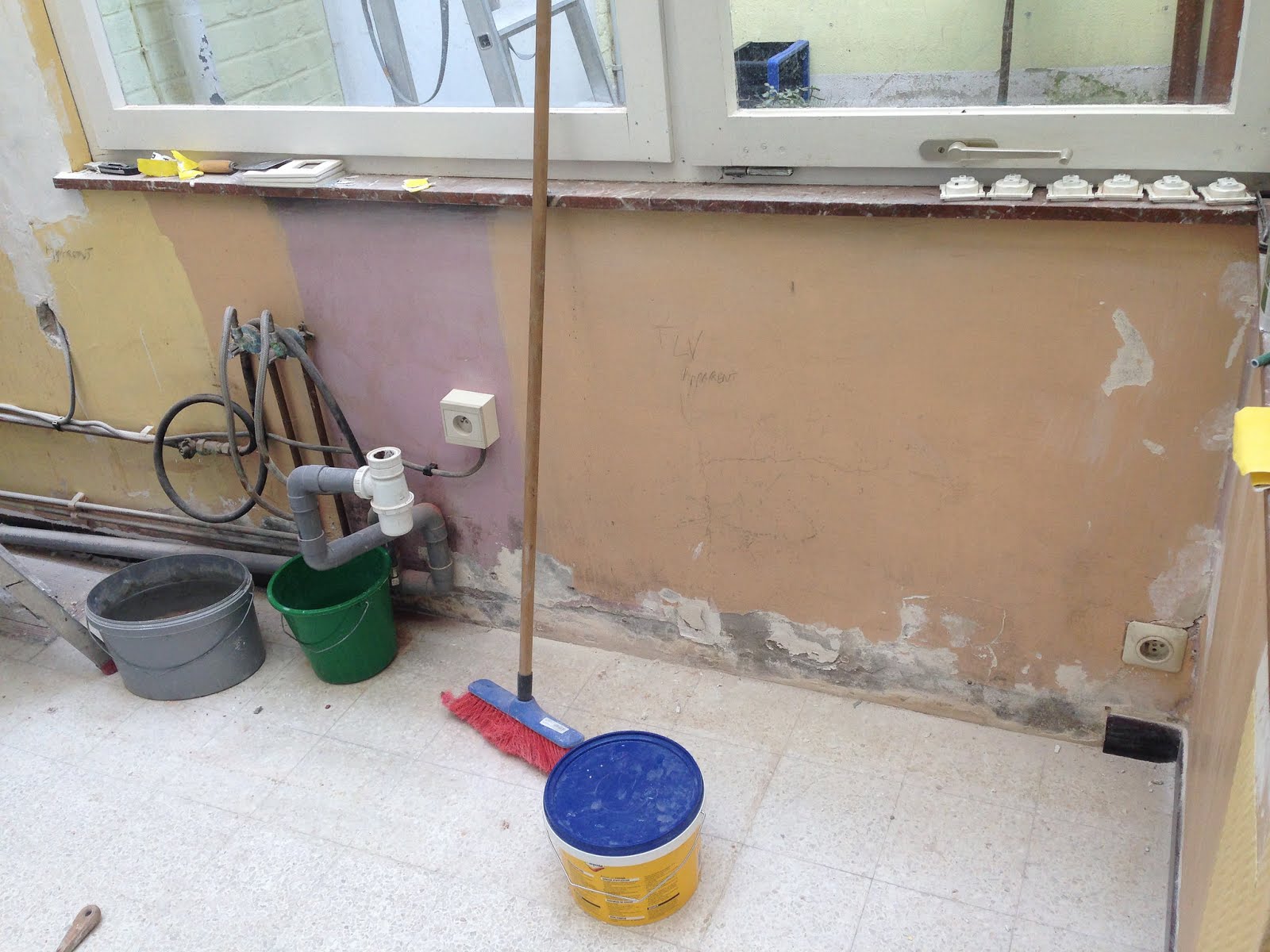 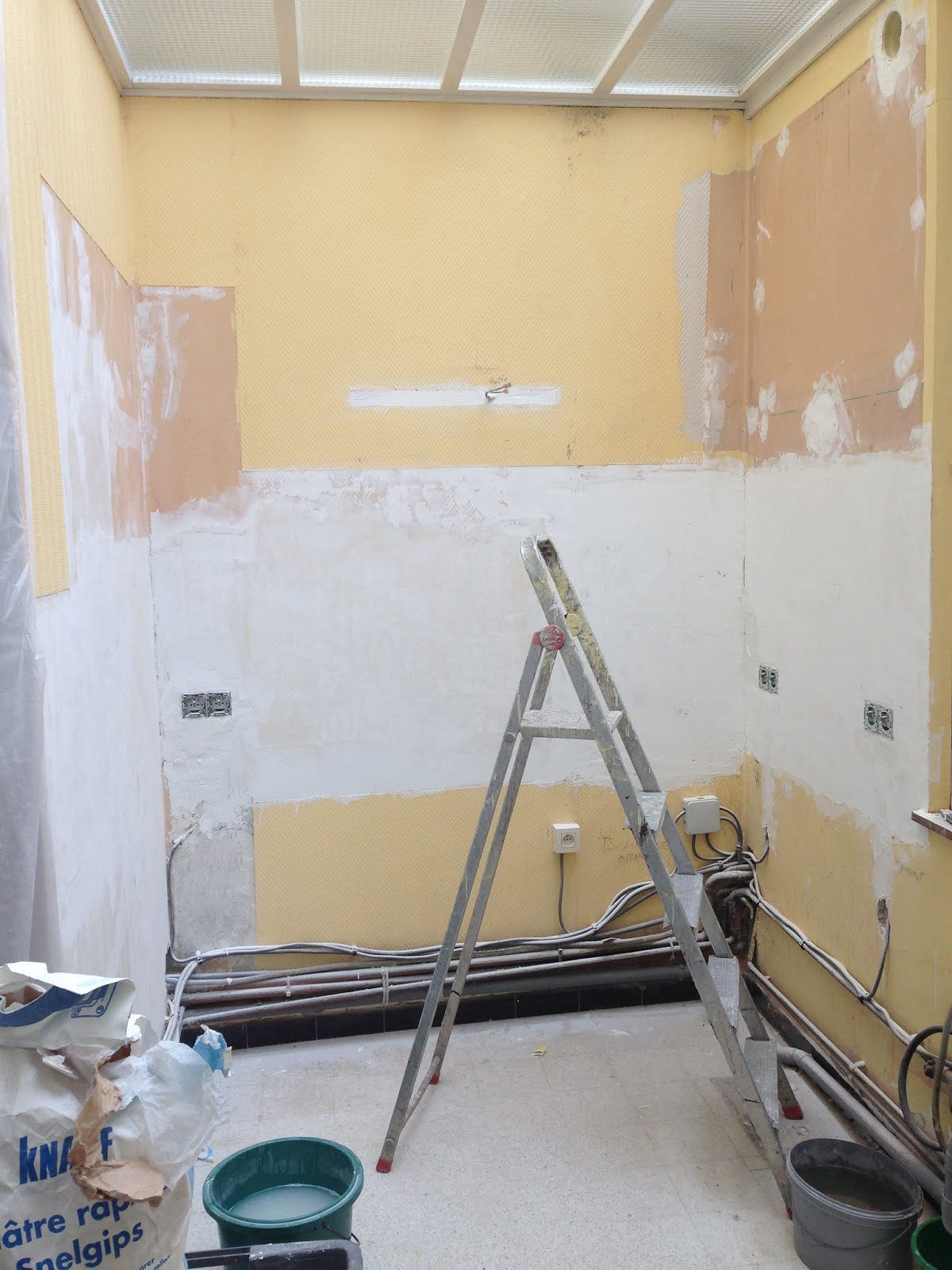 We did a bit of (bad) plastering, installed new electrical outlets and made an opening for the hood (up on the right). 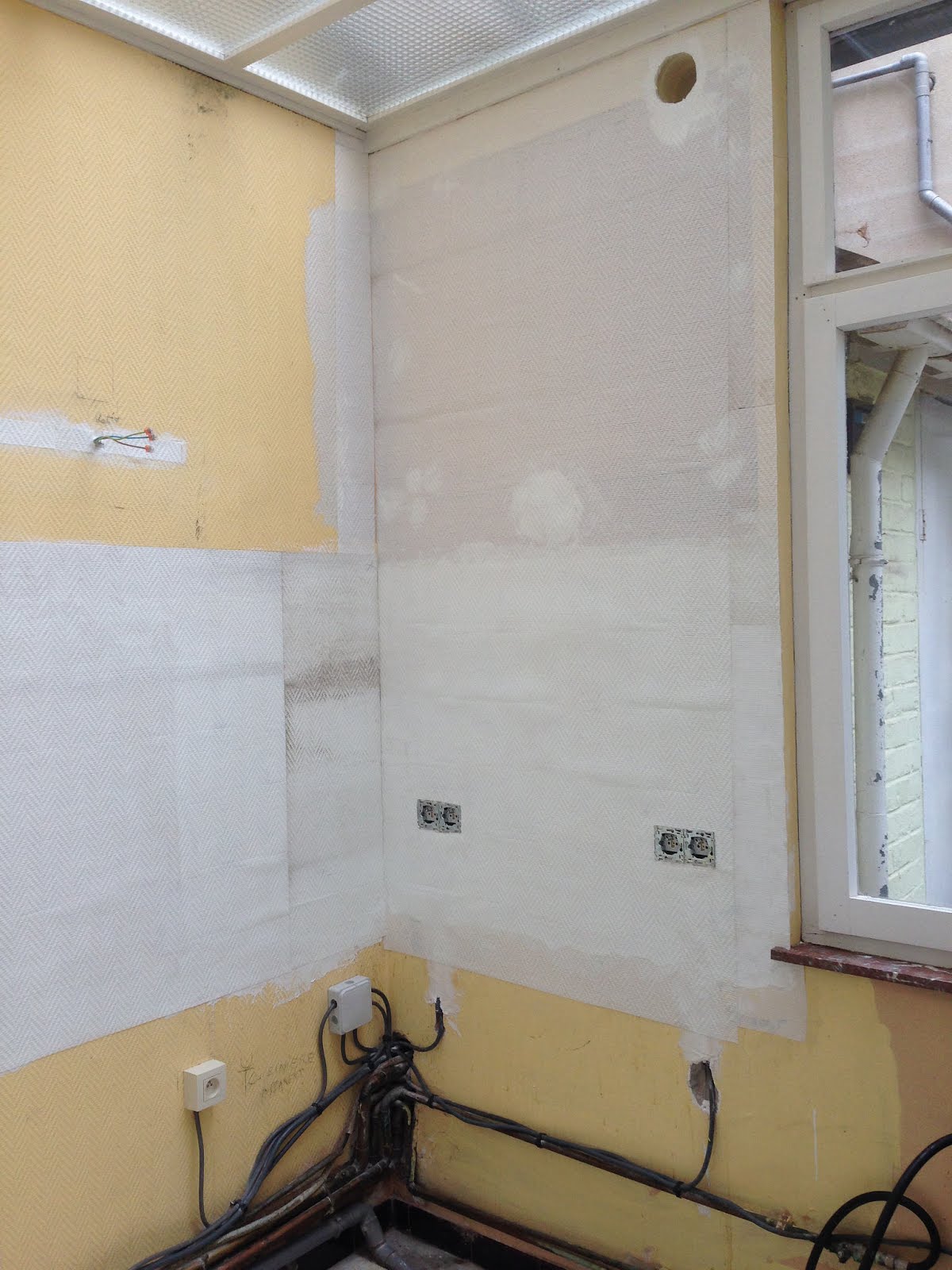 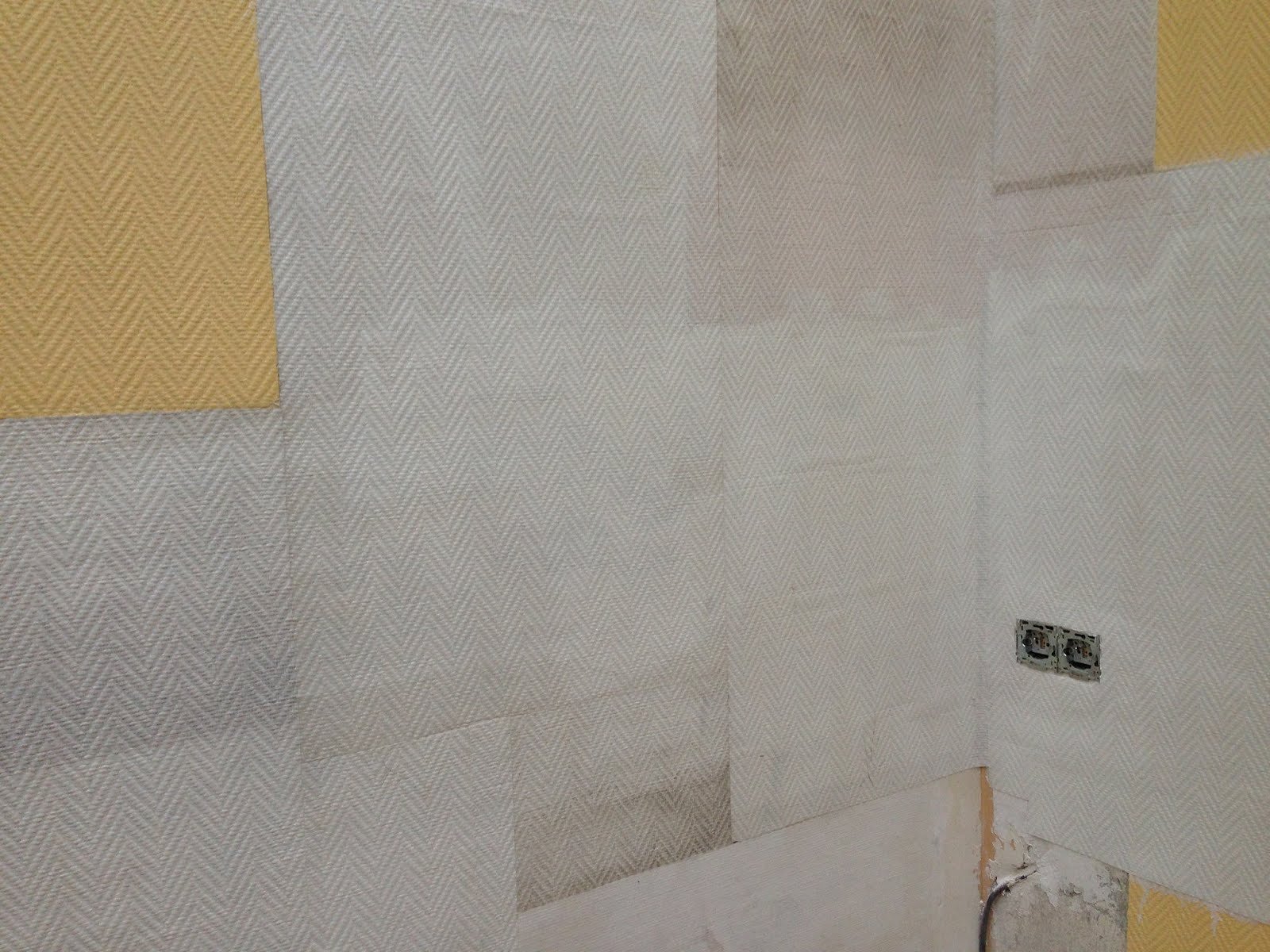 Then I did some really awful wallpaper touch ups! We didn’t want to remove the wallpaper because it would have meant redoing (aka plastering) all the walls and also, we are not plasterers and didn’t want to spend money. Instead, I found some old rolls of the existing wallpaper in the cellar and did some crafting! Some of the rolls were dirty from all the dust and there’s a bit of overlapping going on… Next I sprayed an old dishwasher that was previously in the bf’s parents’ kitchen. It was yellowish but had been white in the very beginning of its life. I’m very thankful as our family gifted us with a new oven, secondhand dishwasher (from the bf’s mother who had her kitchen redone), secondhand dryer (from the bf’s brother who moved away and he had gotten it previously from his old neighbour who had passed away), new washing machine, secondhand hood (left over from my grandparents’ old kitchen that they had redone) and new faucet (it was my uncle’s but it didn’t fit in his kitchen). 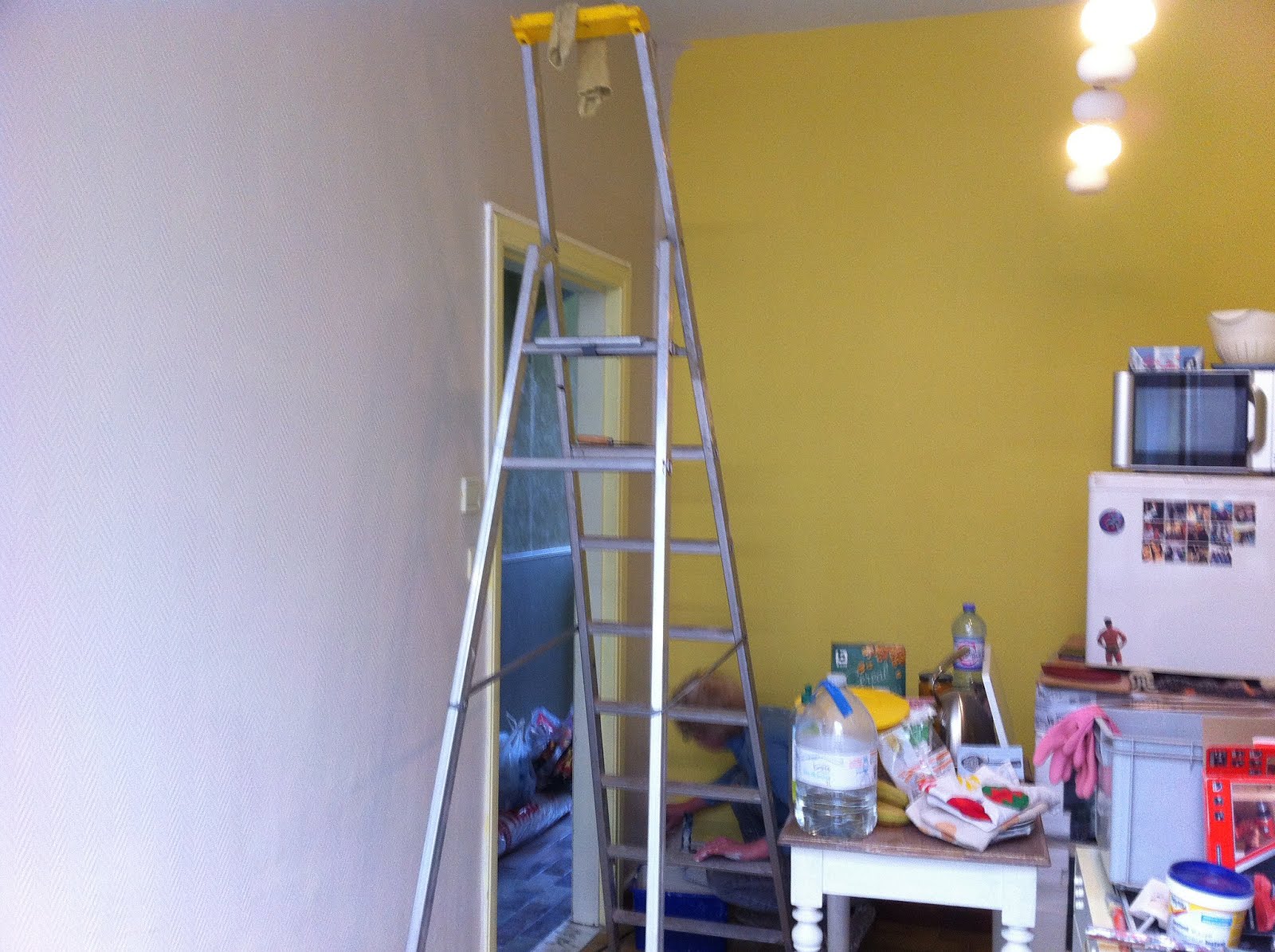 Then it was time for the real deal: PAINT. Oh my! What paint can do for the soul is a miracle. Notice I didn’t paint the trims yet. I originally wanted to paint them the same colour as the walls but ended up doing something else. 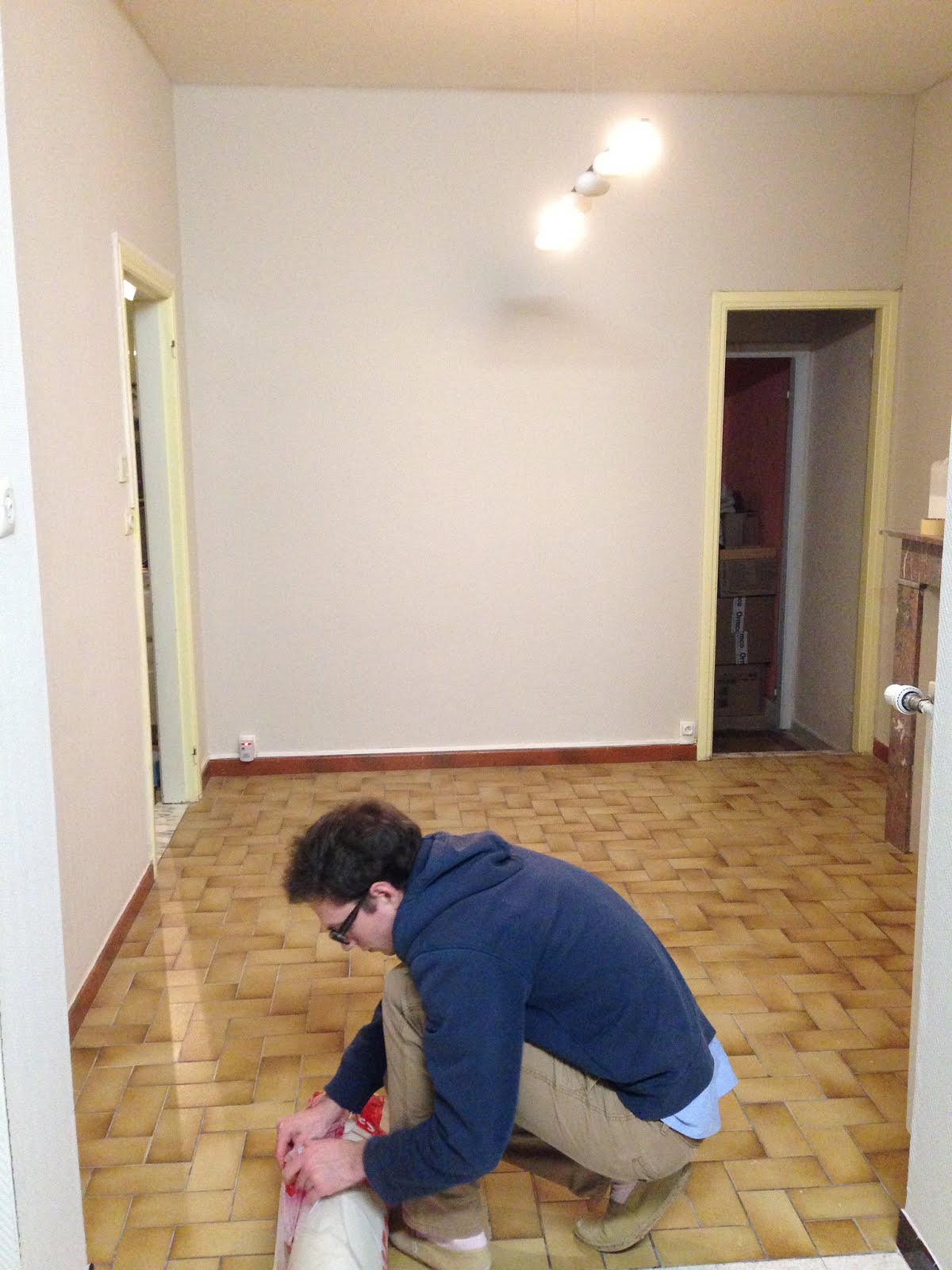 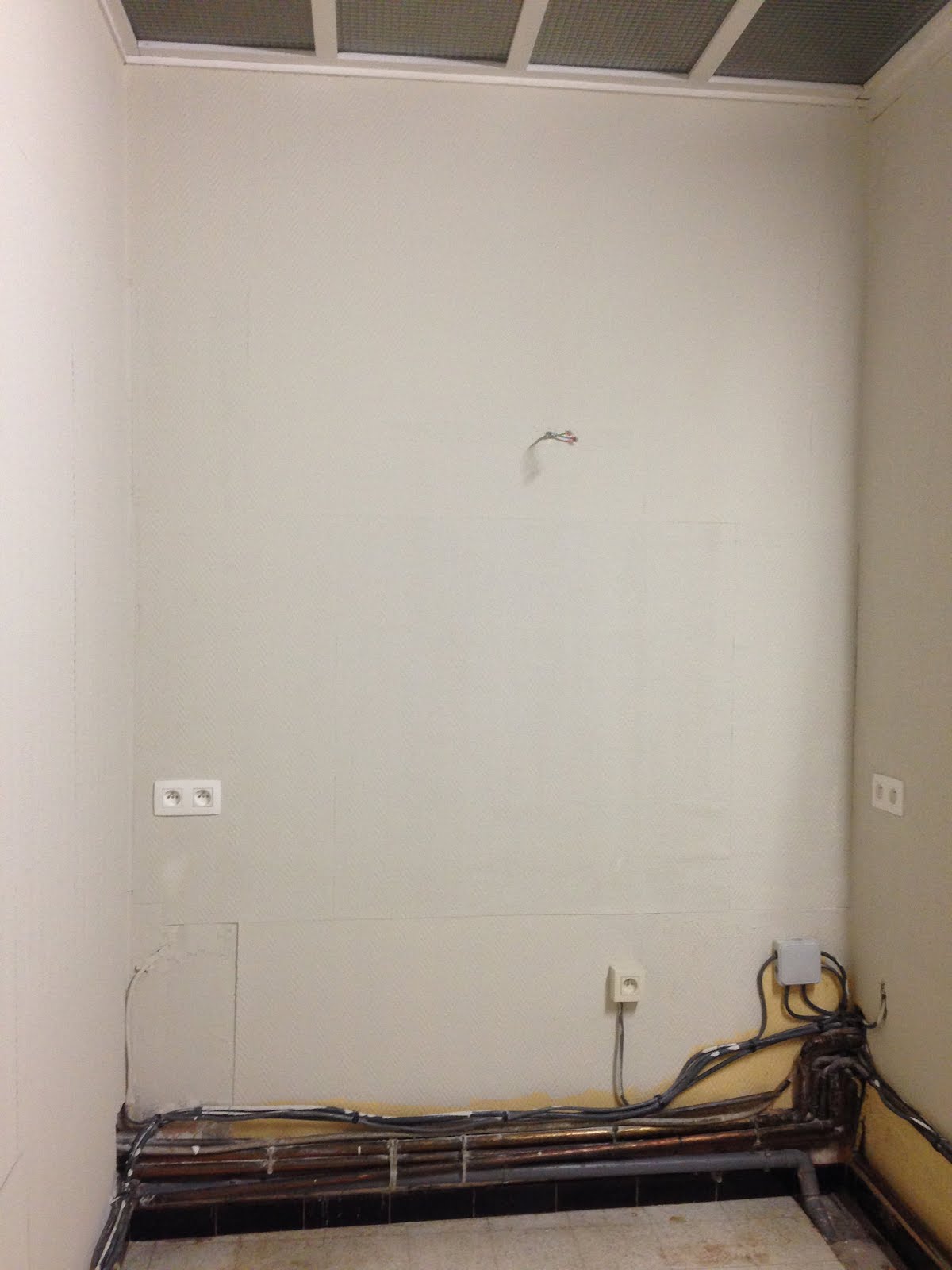 Next, we installed the vinyl flooring and it was a much easier job than I thought! 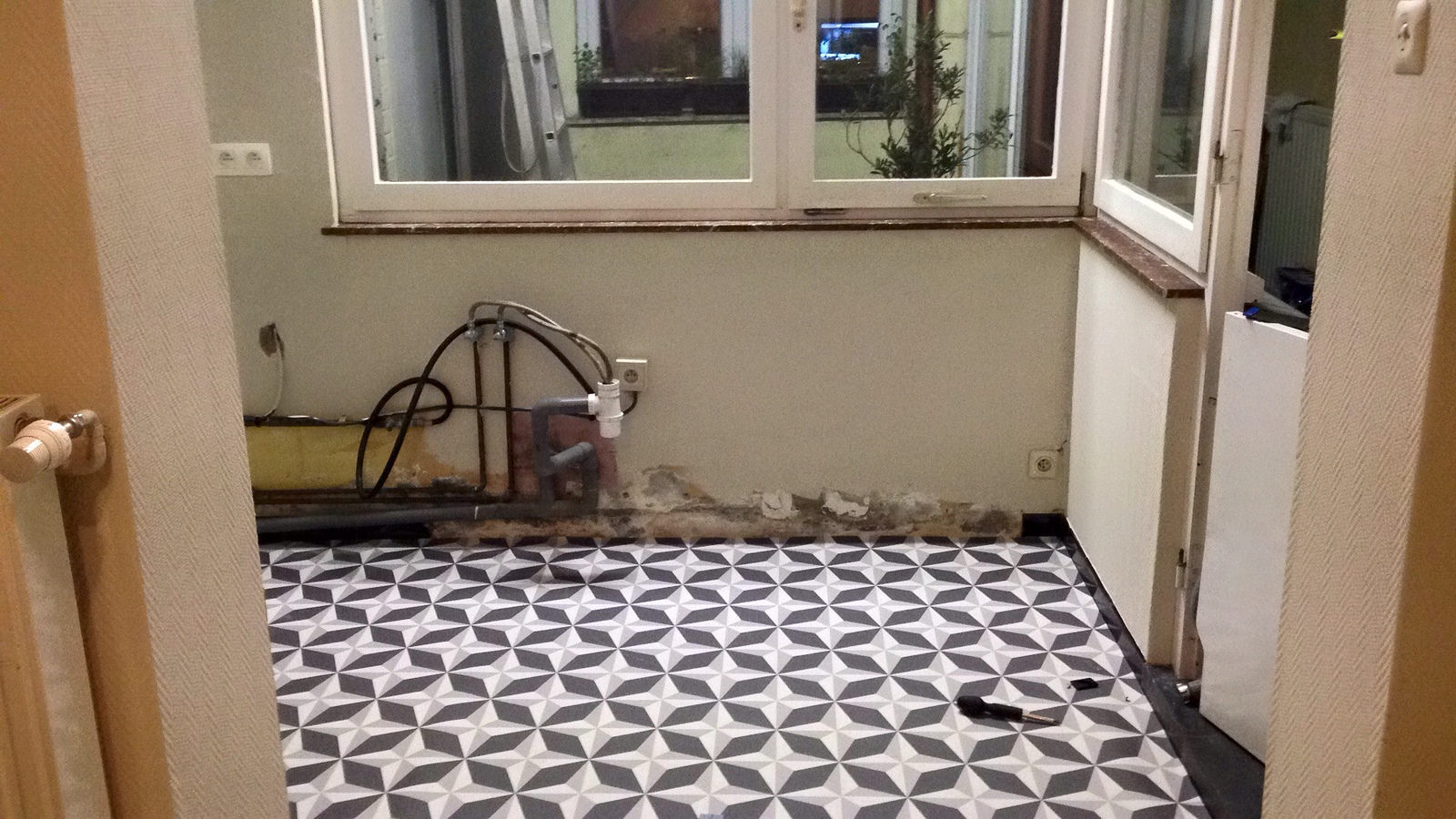 Everything was pretty much ready for the kitchen units that we built one at a time. The under the sink ones come from Brico Depot, a French home improvement store which is known for their cheap prices and the drawers unit comes from Ikea. It was more expensive that we would have liked but I wanted something practical and I had already made a lot (A LOT) of compromises to save money. So I had to have drawers for my spices and pots and pans, otherwise it would have been a nightmare. Here is what I originally wanted>> 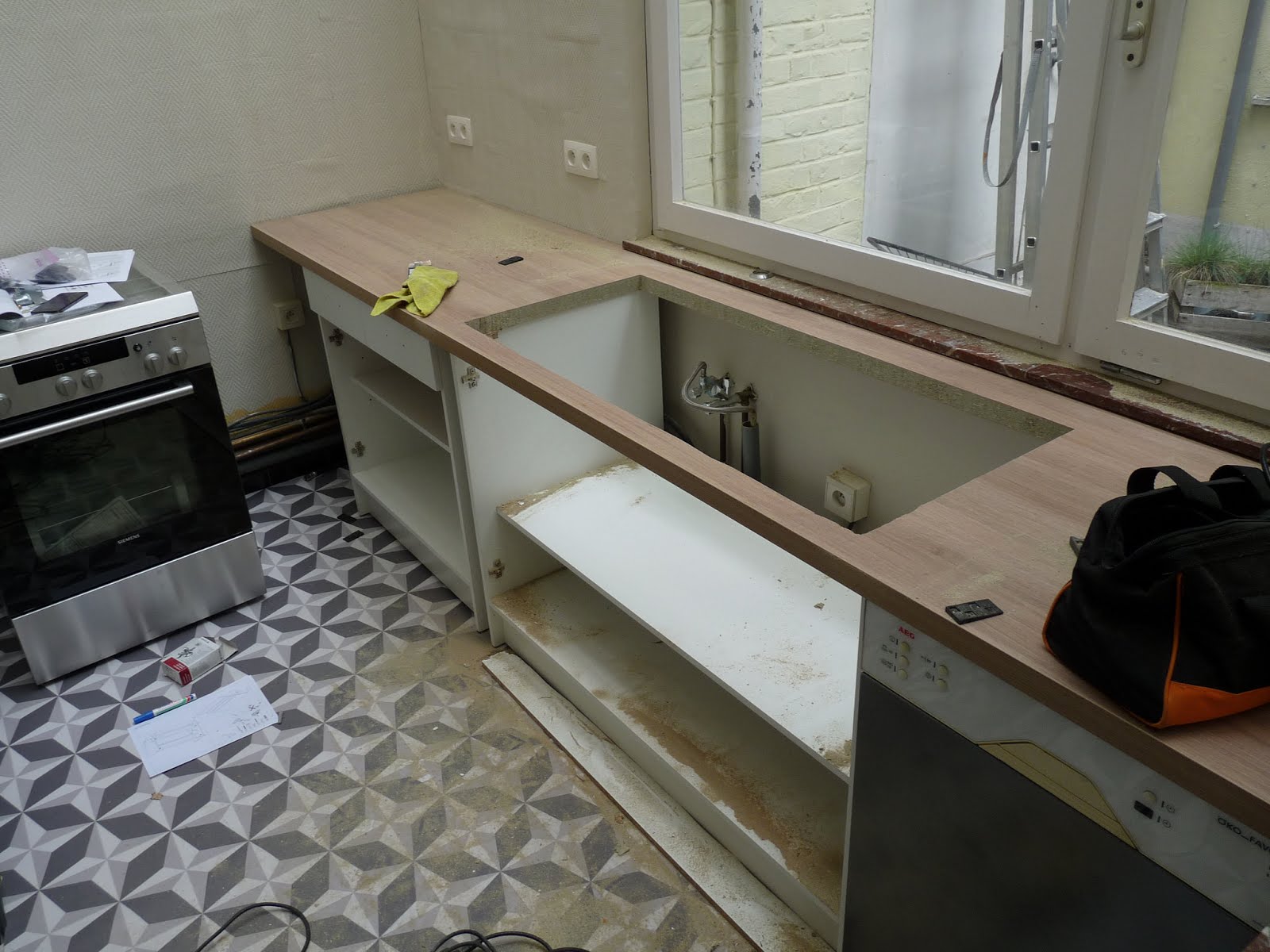 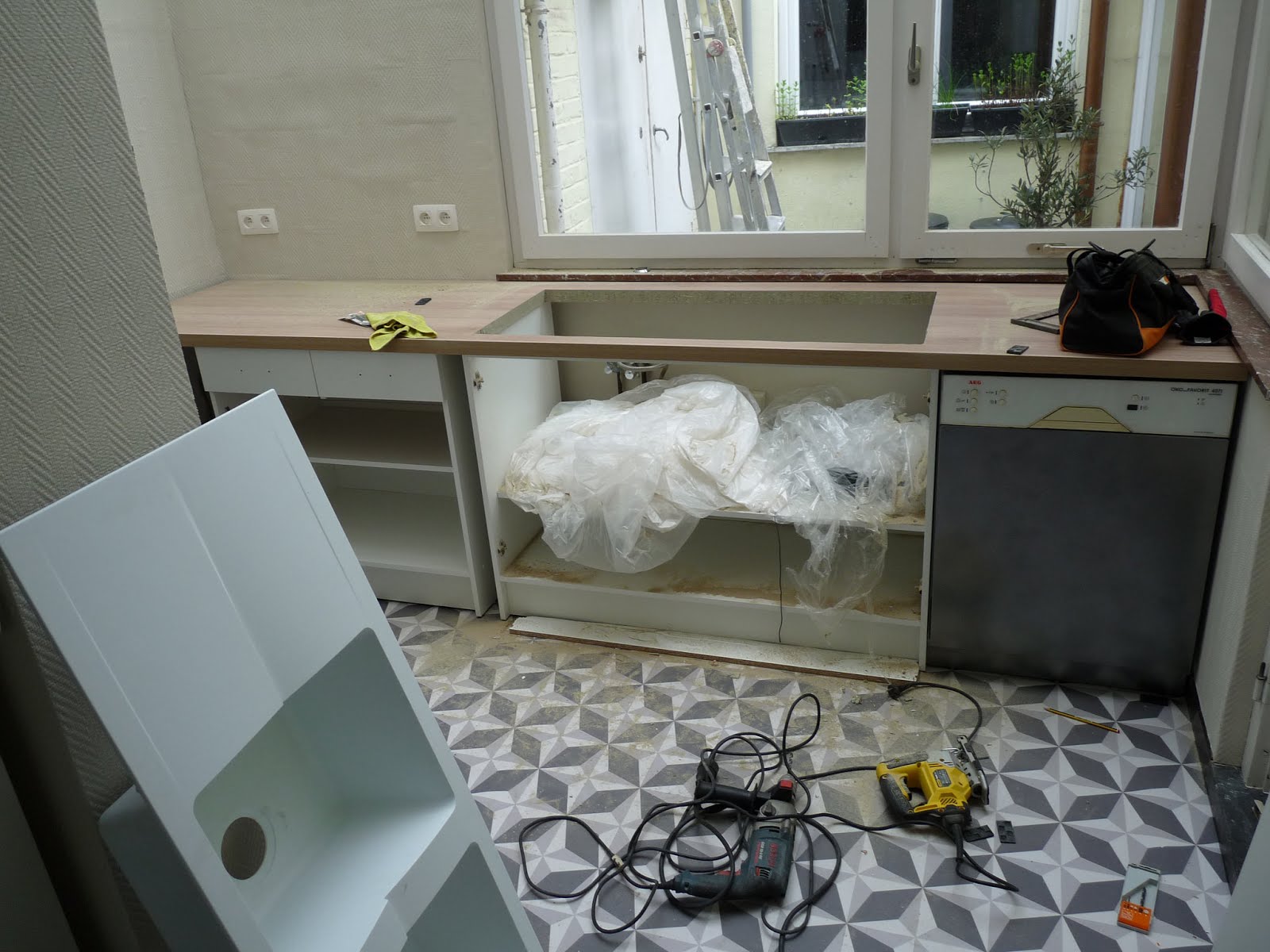 Yay for a working sink! All thanks to the bf who really had a hard time fitting it in. And also because I had a major panic attack when I saw all the mess he had made while cutting a hole for the sink… Poor bf… Anyway, that’s where I left things off in my last post back in May! 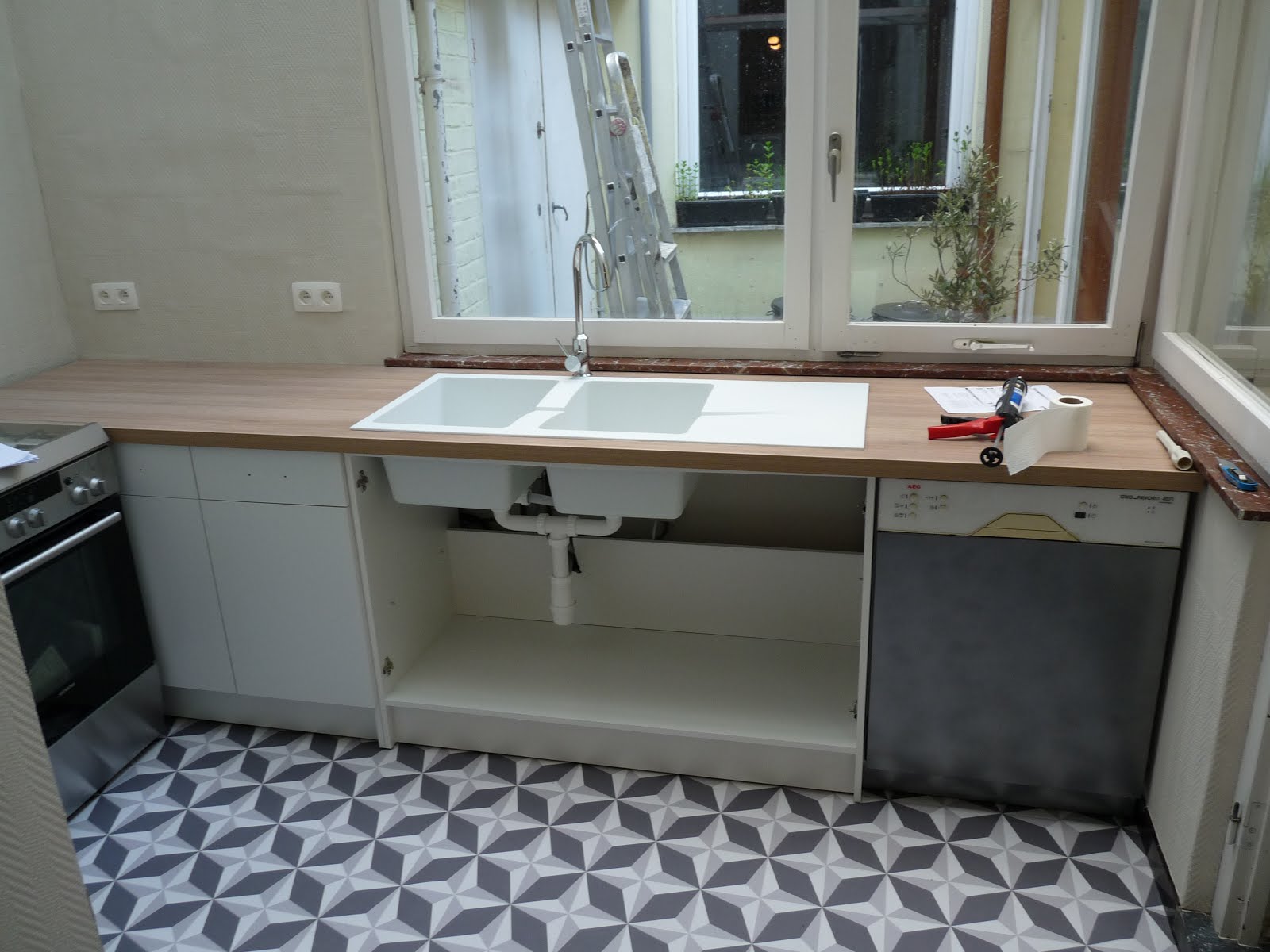 You see those disgusting yellow walls outside? Well, they’re no more. But that’s for later. 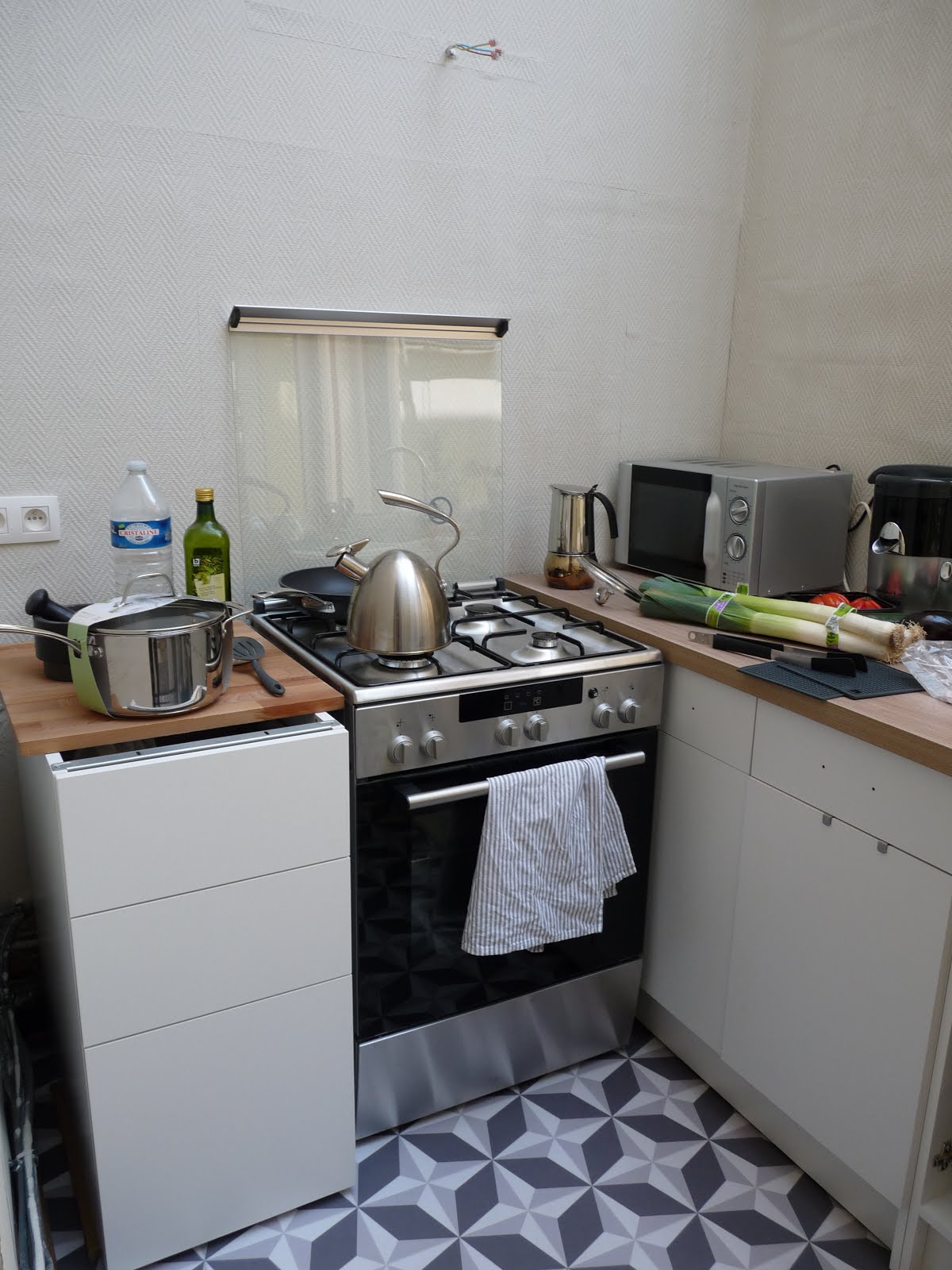 On the left is the Ikea unit we installed for easier use. I really prefer the flooring that we installed but I must admit it’s a pain to keep clean as the surface is rough. As you can see, we still had the door handles to fit. There was also that left open side that we needed to hide. The cables and pipes were in the way so we couldn’t fit any kitchen unit there. Also, the walls weren’t straight which meant that we had to be imaginative. There was also the problem of the cutting board: we needed to add a piece of countertop there as well. And fit a hood over the cooking range. 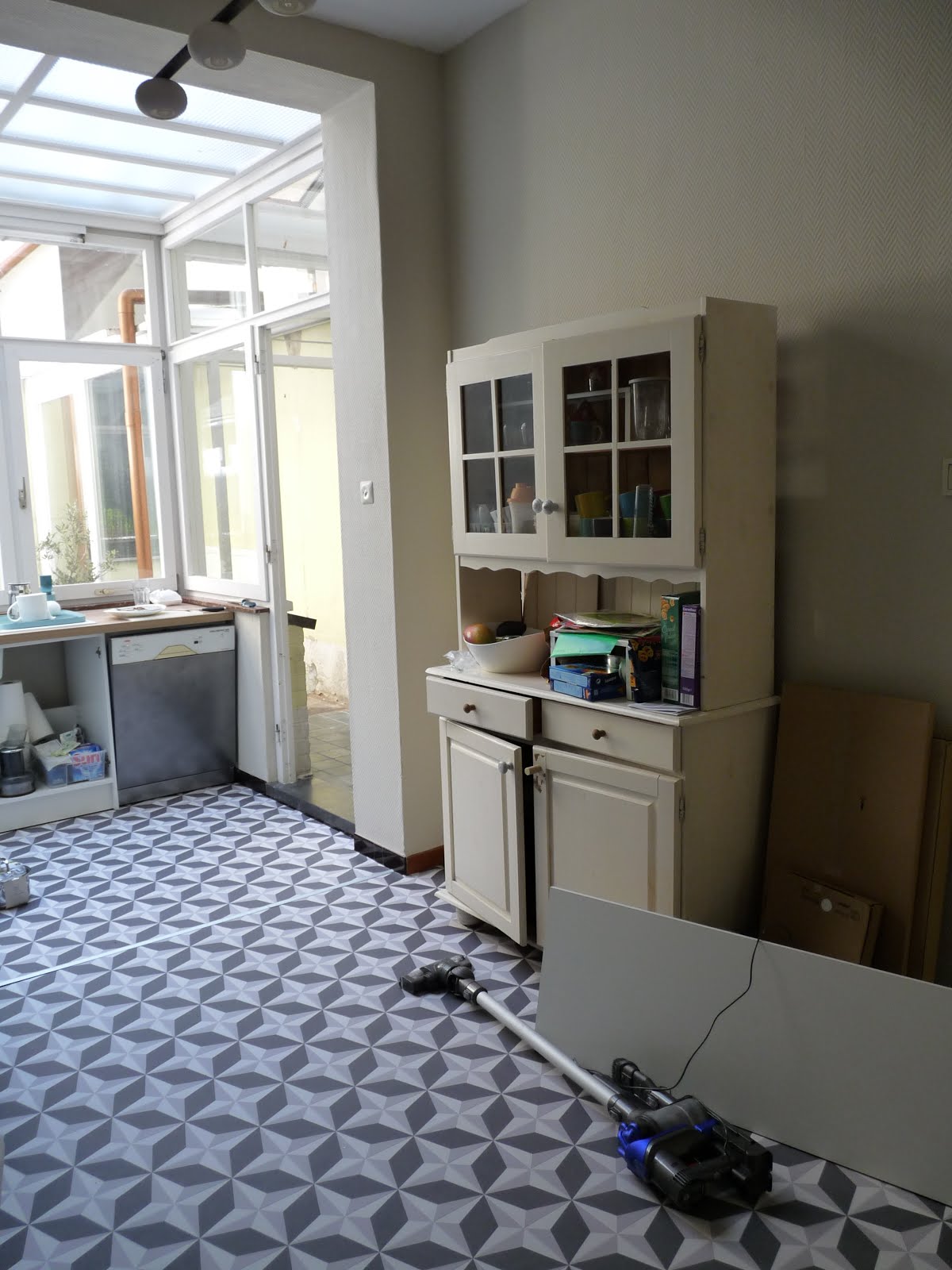 We didn’t do anything to the kitchen in June. At the beginning of the summer, I painted that beautiful dresser Farrow and Ball Brinjal and Charleston Gray on the inside. 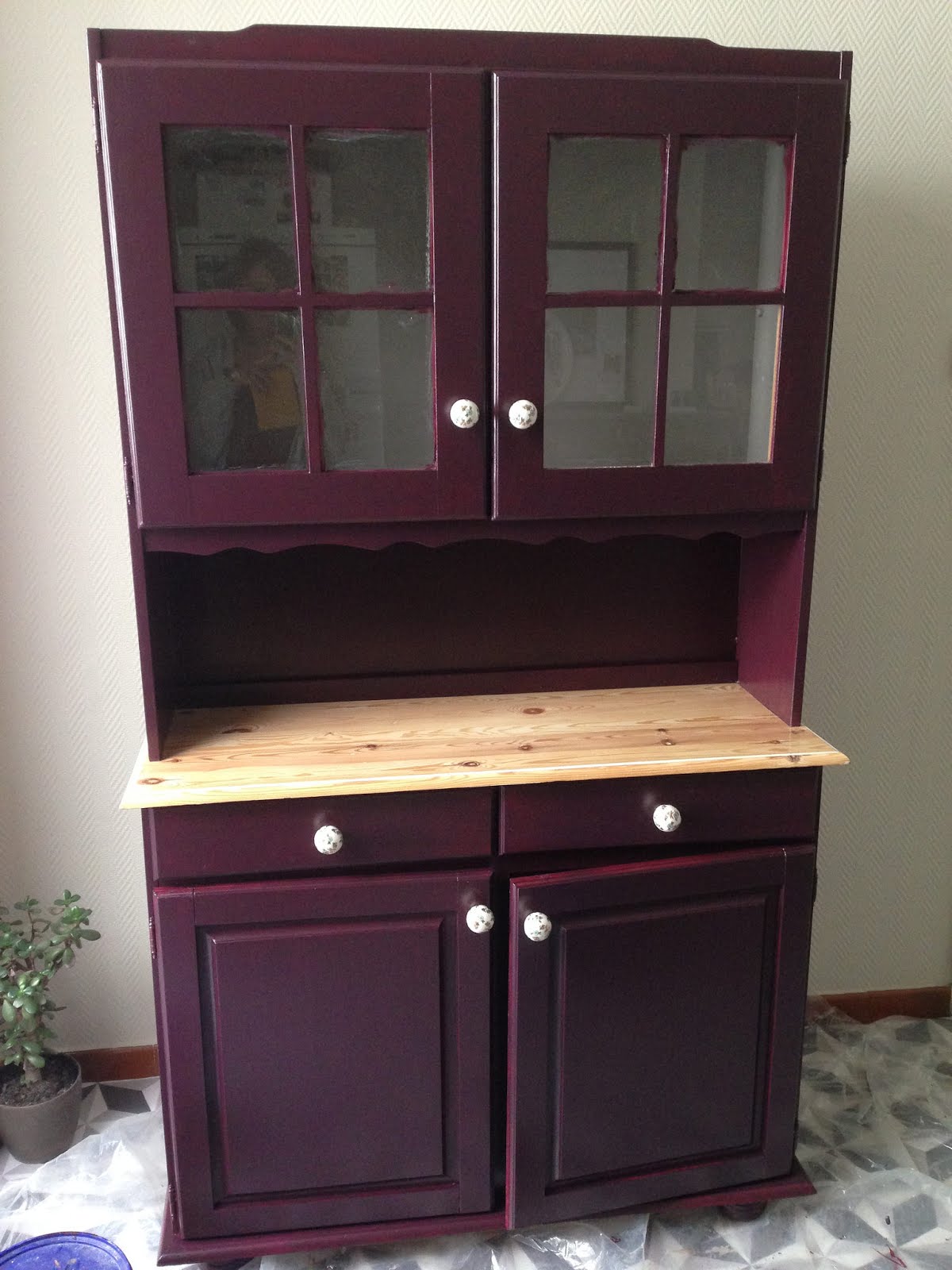 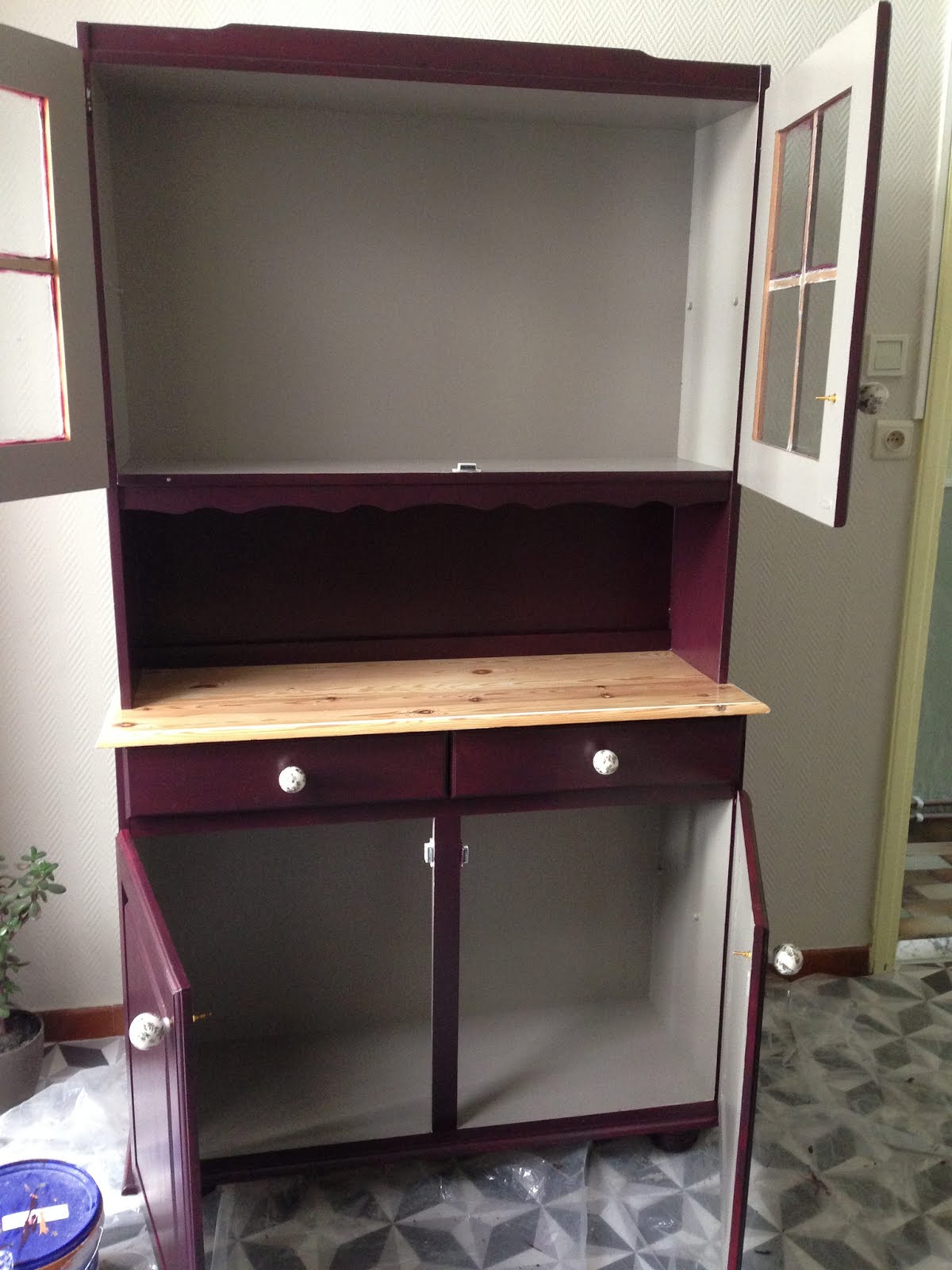 I absolutely love how it worked out in the end. I was being sick of seeing everything in white and grey and I always thought dark burgundy looked stylish and modern so I made the move. Also, I must admit I had really wanted to try a F&B paint because I’m a blog addict and was totally under influence and wanted to try the paint for myself. I also wanted to do a nice job redoing the dresser and wanted to make it glam. Hence the beautiful knobs I hunted down on anthropologie.com and got on sale (down to 6€ each) because at 10€ for one and at almost 100€ for the paint it was a already a really pretty expensive makeover. 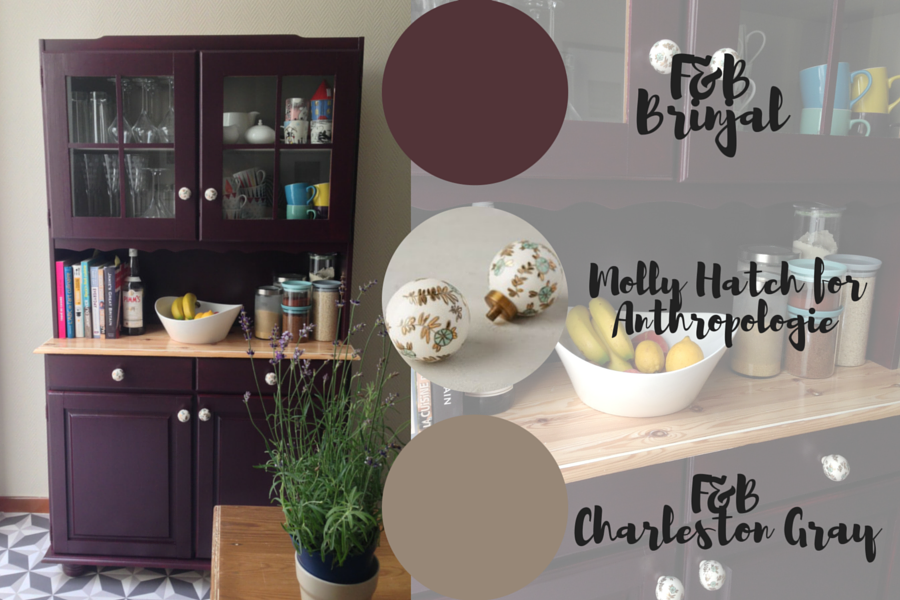 The dresser was actually a wedding gift my parents received as newlyweds and it was in poor condition after several moves. Read the whole story here>>

As you can see, I had placed a small table in the middle of the room. The plan was to build a small kitchen island that would serve as a storage unit, a work surface as well as a breakfast table. I ordered two high chairs in the summer sale from the John Lewis Croft collection in the colour Fern and had them delivered to Belgium. That was a bit over the top but I’m glad I did because they’re really beautiful and sturdy and I love the details. Now that the trend is scandinavian everything in Belgium I couldn’t find anything remotely similar. 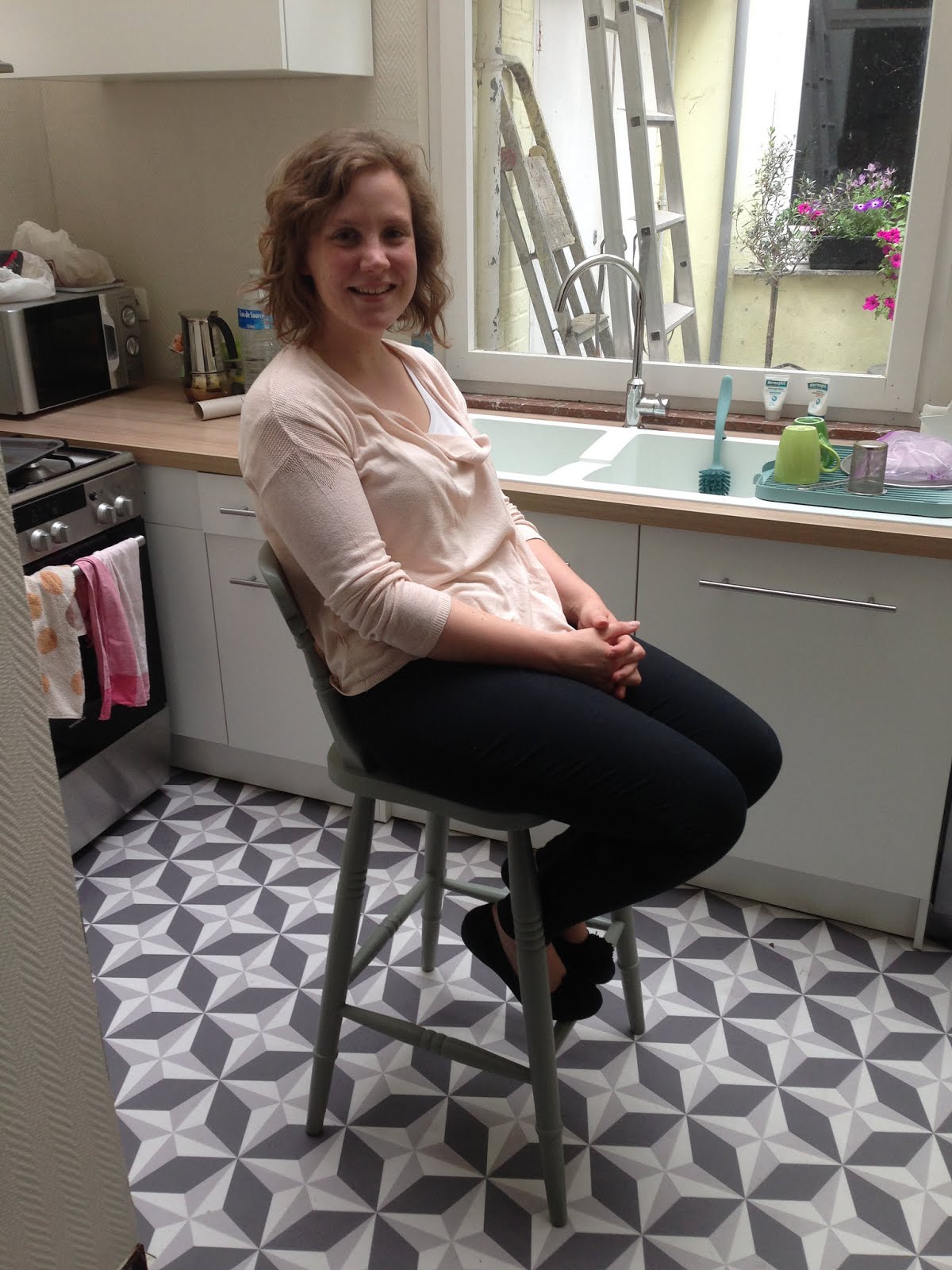 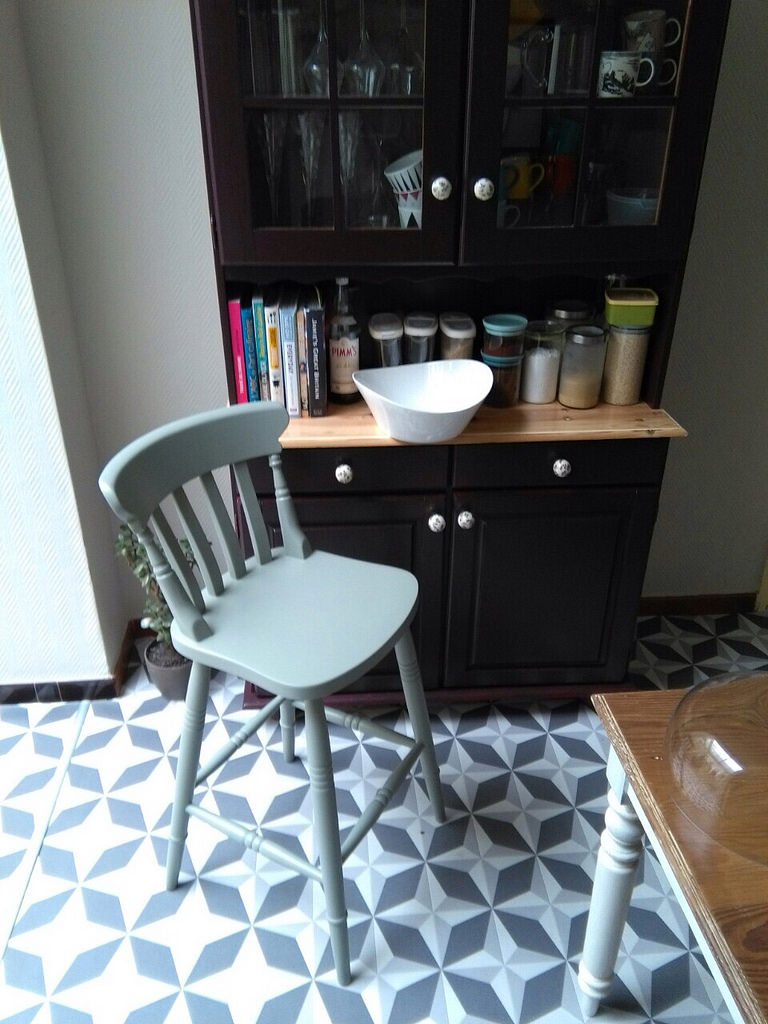 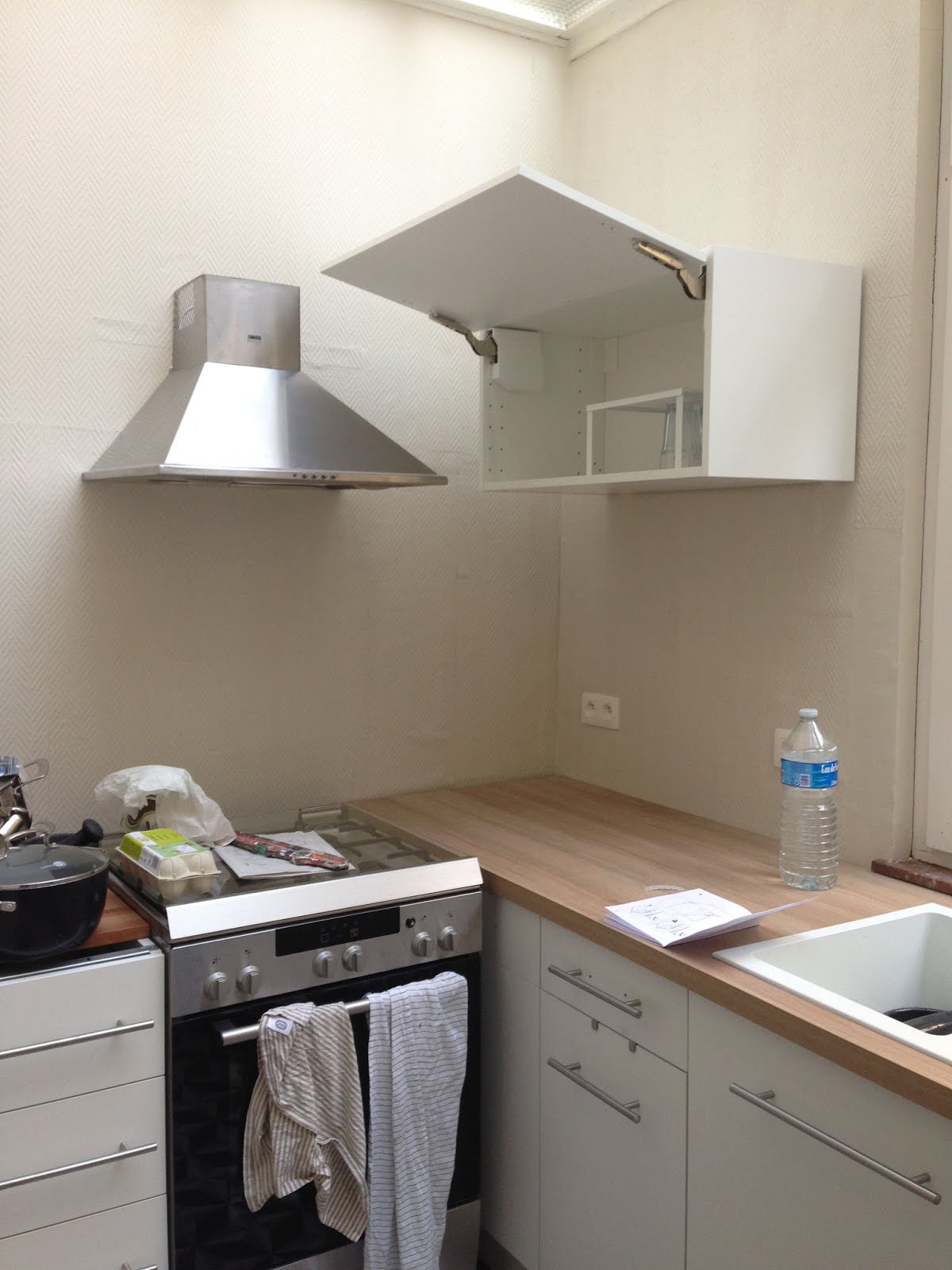 At some stage, we had installed another Ikea wall unit to have more storage for glasses. And you can see we already had put up the hood. As I am writing this, it’s still not connected to the vent… 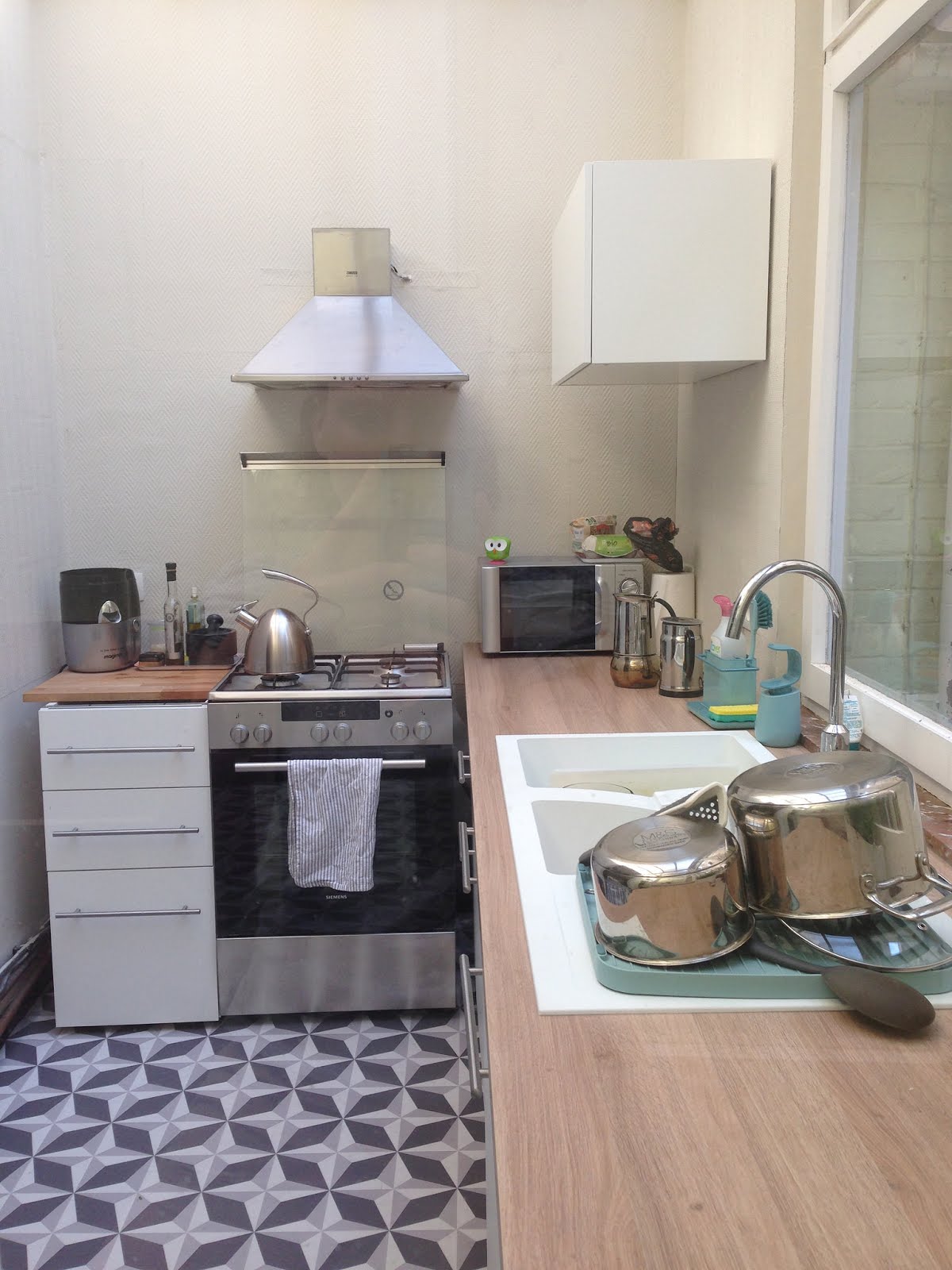 Oh, and I also bought a Brabantia “inside bin” kit to place under the sink. It was around 50€ and it’s functional, I really like them. I plan on taking them with me when we move out. 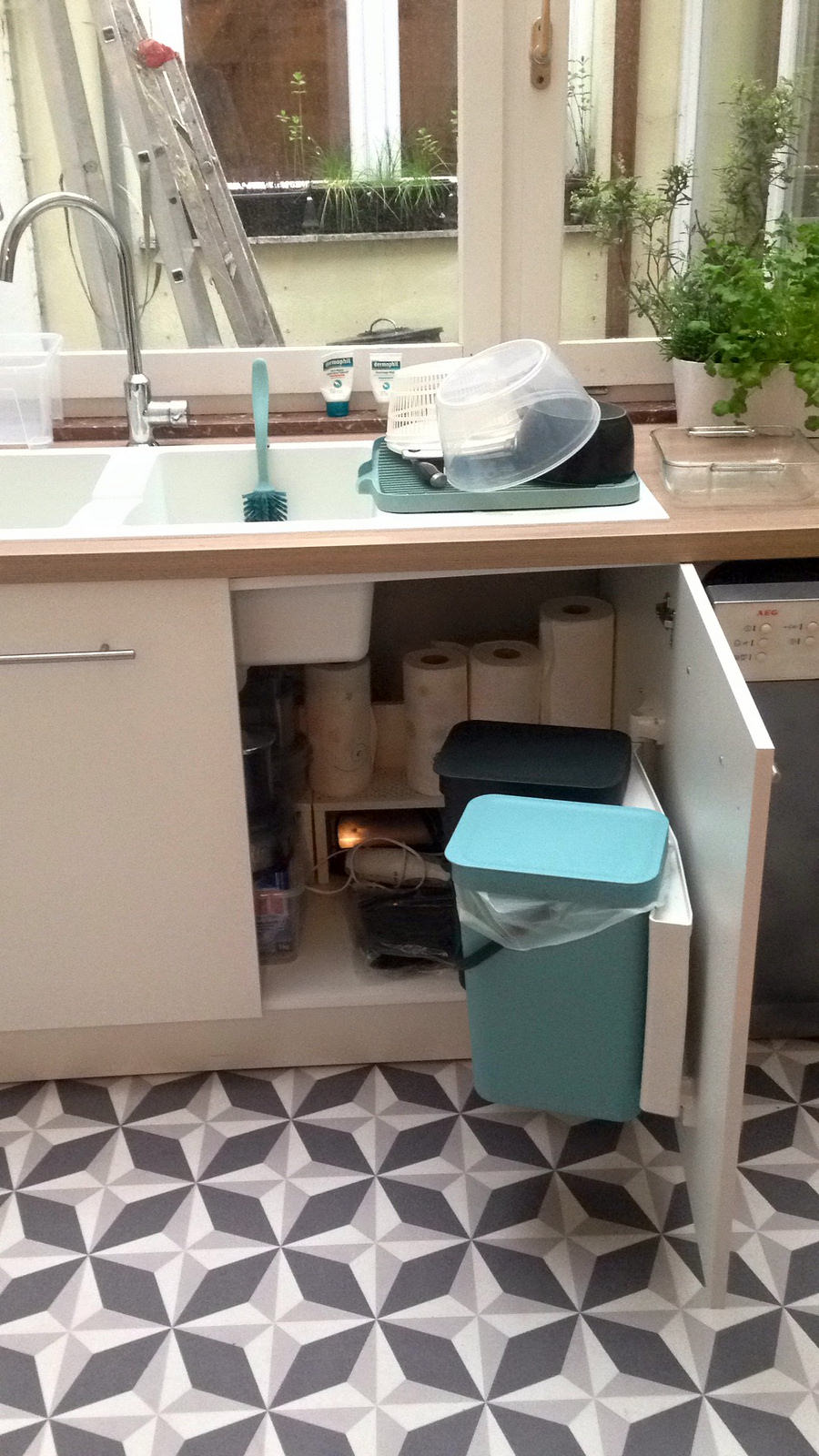 We did nothing on the house during the summer because we needed a break but we went back into full renovation swing in September. We built the island that I painted grey (see the picture at the top of the post!) and added an Ikea countertop over it. 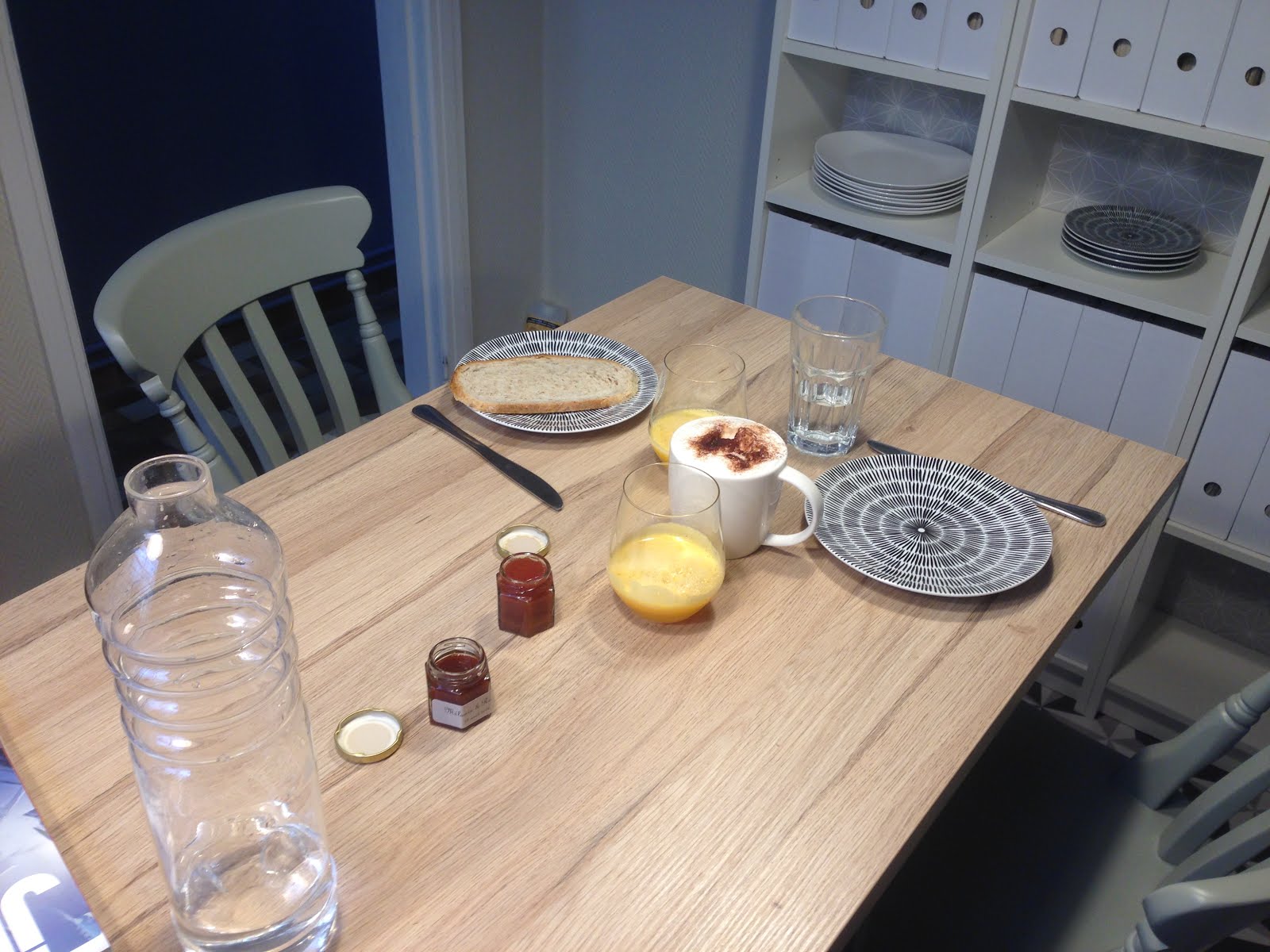 How we roll breakfasts…

That’s a wrap guys. I need to take after photos, I don’t know when I’ll do, but I will. I need to show you the shelves we built, you need to see the island in all its glory with the new pendant lights and  you need to hear about that charity shop mirror I DIYed.

Well, I hope you enjoyed that little renovation story. Do stay tuned for a full reveal later on!